Tribes of the Steppes

Mongulai
Apr 9, 2019 History of the Mongols, No Time For Rest 0 Comment

In the early thirteen century the native land of the Mongols- a vast territory stretching from Lake Baikal past the great Gobi and from the Khinggan mountains to the Altai Mountains- had no integrated system of administration, and was inhabited by independent tribes who were constantly at war.

These tribes, mostly of Mongol, Tungusic, and Turkic stock, lived as the Naimans along the Altai Mountain Range, the Hereid (Kerayits) in the basin of the rivers Tuul and Orhon in the range of the Hangai Mountains, and the Mergid (Merkits) in the Selenge River basin south of Lake Baikal. Other groups included the Onggirat along the Khinggan Mountain range in Buir Nuur are east of Mongolia, the Ziibii south of the Hentii Mountain Range, the Onniud (Onguts), in the Gobi, and the Hamag Mongol tribes alone were true Mongolians. The Naimans who lived in the Altai Mountains were of Turkic origin and the Kerayits seem to have been Nestorian Christians.

These tribes, differing in language and religion, to say nothing of origin, fought one another and tried the overcome the rest.

Although these tribes rarely ceased fighting among themselves, they felt that the neighboring nations were waiting for an opportune moment to strike and were hence trying to fuel the animosity between the tribes in order to wear one another out. They seemed to understand that only when United would they be able to defend themselves, particularly against the constant threat of the powerful Jin Dynasty. 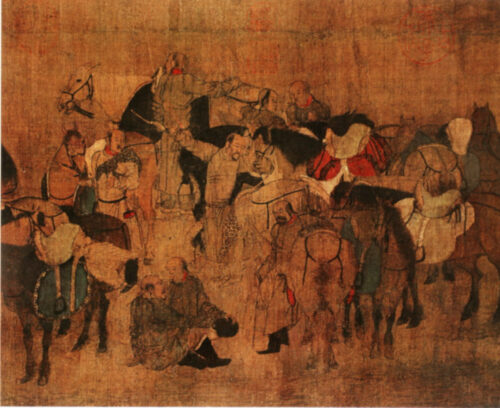