How Do Mongolians Celebrate Tsagaan Sar

Mongolians celebrate the Lunar New Year (Tsagaan Sar) / Lunar Month/ as a passing of one year and a welcoming of a new one. The first day of the New Year is traditionally a popular festival. It is celebrated on a broad nationwide scale. This is the celebration of the passing of the severe winter safe-and-sound and the welcoming of a new year. It is also a celebration of getting wiser. It is an occasion of three festivities. The literal meaning of Lunar Month in Mongolia is ‘white’. The white color is the symbol of sincerity and happiness in Mongolian tradition. That is why we call Lunar Month Festival as Tsagaan sar or “White Month.” 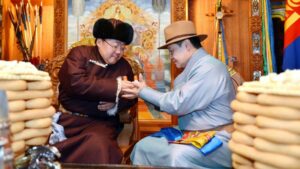 According to historical chronicles and the research of scholars, Mongolians used to celebrate in the autumn, during which dairy products were available. Today, in contrast, the festival is celebrated at the end of winter and the beginning of spring. The vestige of it exists still among the Kalmuck people. They make a ceremonial zul sar (ghee lamp). But in the process of history Mongolian solemnly celebrated Lunar Month at the animal birth period, during which we taste the first dairy products.

Traditionally we do cleaning on the 29th of the last month of winter as preparatory work for the Lunar Month festivity. This is a symbol of welcome to the coming year without blemish. On the 30th of the last month (bitüün) of winter, we cook a pot of mutton and prepare rendered cream. The cooked molten cakes are piled in three, five, or seven tiers on a big plate. The table is decorated with sweets and other confections. A vessel is filled with fermented mare’s milk. All the members of the family gather together and feast all evening to make wassail.

The order of arrangement of the whole sheep on a plate: 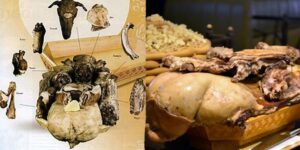 The mutton includes the sheep’s back together with two pieces of ribs and its tail (uuts). The arrangement of sheep’s limbs follows the animals’ limbs. The breast is placed first at a big plate. Then the vertebrae and forelegs are placed. The front long bones are placed in the wake of the forelegs similar to how a sheep lies down. The mutton is placed upon the arranged limbs of mutton on the big plate. Then the head and four seared shanks are placed upon the mutton. This is called ikh yosny uuts or ‘whole mutton on a plate’. The ears and horns of the sheep are smeared with a skim of milk or ghee. The muzzle of the sheep is placed toward the front of an animal to the west of the mutton. The shinbone is placed toward the vertebrae to the east of the mutton on the plate. The front of the mutton is faced toward the back of the ger. When we offer the mutton, we follow the above-mentioned pattern. This kind of offering of mutton is performed on the occasion of the Tsagaan Sar, new ger warmings, and days of commemoration. 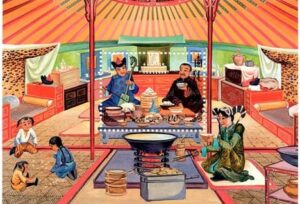 The person who carves the mutton can follow the traditional way and set aside a piece of mutton as a share for the hearth. First, he carves both sides of the mutton, then he carves small pieces from both sides and eats them. He then distributes the carved pieces of mutton with his stretched hands to all the members of the family and others as their share of the mutton. Those who are present stretch out their hands and receive them with honor.

As soon as wassail is made at home, they visit their neighbors and ask each other, “Are you enjoying the wassail?” In such a manner, they share their joy and celebration to see off the passing year. This means that they treat their neighbors with their animals’ products.

On the earlier morning of the next day, every member of every household is in holiday array. All the members of the household defer to the most senior person, but the precedence of age is significant. The head of the family, then his wife, then their son or daughter, according to the sequence of age, stretch out their both arms with open palms while holding a khadag (sacred scarf) under the arms of a senior person to prop up his or her elbows. He or she can say ‘Are you well?’ The senior person can place his or her arms with open palms on the greeter and answer, ‘I am well. Are you well? Live long and be happy.’ This propping up of the senior person’s elbow by a junior person signifies that the junior person shall always treat elders with deference.

After doing their greetings, everyone can sit and exchange

Did your animals pass the winter well?

Are your yearling colts fattening nicely?

Are your calves muscled?

Are your sheep tailed?

Are your yearling camels’ humps upright?

In this way, we talk in a rhythmical manner and ask each other’s ages. Then we taste dairy products or steamed rice products. After this, the senior person carves two sides of a saddle of mutton and distributes the carved pieces to all gathered at the feast. The greeters are treated with tea and food and fermented mare’s milk or milk vodka. The enjoyment continues for a while. During the Tsagaan Sar we not only visit our neighbors but also visit our close relatives, even those who live far away. Presents are exchanged. If possible, children who live separate from their parents, endeavor to greet their parents in person within the days of the Tsagaan Sar. Grandsons, granddaughters, and cousins try to greet their paternal and maternal uncles and aunts within the days of this celebration.

There is a view that if your Tsagaan Sar is abundant, your life shall be prosperous in the coming year. So, some of us try to celebrate this festival extravagantly. During it, we play a certain number of games. Children, especially, like to play dibs. There is a certain number of games, such as Dörvön berkh (four dibs). This game is played by casting four dibs or game pieces. The games are Arvan khoyor jil (twelve years), maliin zayagaa bodokh (calculation of animal destiny), süülnii yasaar shodokh (to draw by caudel vertebrae), or a sign of luck, wheel, and üichüür. These games are devoted to test one’s luck. The games range from shooting balls to wrestling, to shooting ankle-bones, to breaking off thoracic vertebrae or straining the cervical vertebrae of a sheep, and to wrench a patella as a way of testing one’s strength and ability.

Children play games under the guidance of the adults on the night of making wassail. The name of one game is Alag melkhii (multicolored tortoise). This is played with anklebones, in which the players cast dice in order to capture bones set out in the shape of a tortoise. This game has strict rules of play. The players sit in a semi-circle. The dice are cast. According to spots, a player can take off pieces of stacked ankle bones. The player who collects the most ankle bones is the winner, and this person is considered to be lucky in the coming year.

After the ceremony of greeting, Mongolians cast four ankle bones (four dibs) on the morning of the first day of the lunar month festival.

The children play the game called race dibs (ankle bones) and adults play a game of twelve dibs (ankle bones). The Lunar Month festival was called as “livestock breeders feast” because the national tradition had been neglected in Mongolia for 70 years during the twentieth century. On the occasion of Tsagaan Sar, the wrestling match is arranged and other contests are held in Mongolia.

On the days of Tsagaan Sar today, Mongolians wear ceremonial costumes and ride in modern cars and visit their parents, neighboring villages, and uncles and aunts, and exchange gifts in modern bindings. 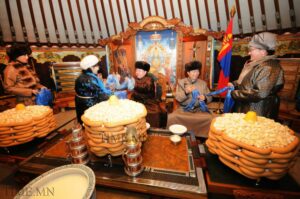