Tsam dance is a part of secret tantric rituals. Although its origin is traced to Tibet, the tsam dance is enriched with various Mongol cultural elements, namely the creative imagination and aesthetics of Mongol craftsmen, the roles of heroic figures of folk myths and epics, and elements of shamanism,and archaic religious phenomena. These Mongol elements give the dance its own Mongol character. Tsam is a complex art of religion and culture, practiced as an integration of body, language, and intellectual genius into a single meaning with the help of dance movements and the charm of religious chanting and meditation.

There were different types of tsam dances practiced in monasteries across Mongolia, such as Tsam of Erleg, Tsam of Tara, Tsam of Geser, Tsam of Milaraib, Tsam of Gürbazar, Tsam of Naidanjüdeg, Tsam of Zegi Gombo, Begziin Dormo Tsam, Tsam of Mam, and Tsam of Bukh. Among these tsam styles, the Tsam of Erleg Nomun Khaan, or sometimes called Jakhar tsam, was the most widespread type. It was properly transmitted from generation to generation with complete costumes, masks, and customs.

In 1811, Jakhar tsam was first performed on stage in Ikh Khüree (the former capital of Mongolia). Subsequently, it was performed 127 times until it was prohibited in 1937. In 1992, after 62 years, the ritual was revived and choreographed at the Gandantegchenling Monastery in Ulaanbaatar, in accordance with the traditional style. The tsam dance in Ikh Khüree was choreographed every year on the 9th day of the last summer month. It commenced at sunrise and continued until sunset. Over the day, around 108-128 different roles were performed, representing upper, middle and under universes with costumes of different colors, masks, and sizes. Each and every movement of the tsam dance have their own names. Every character in the tsam ritual performs its individual actions either to invoke, bless, or demolish a spiritual essence through the appropriate musical rhythms. The religious orchestra consists of ikh büree (grand trumpet), khengereg khengereg (big drum), bishgüür (shawm), tsan (cymbals), ganlin (human-bone trumpet), dun büree (conch trumpet), duudaram (gong-chimes), and damar (double-headed hourglass drum).

Among the types of Khüree tsam performances, there are versions with specific Mongol characteristics. For instance, Tsagaan övgön (Old White Man), regarded as ‘Ornii urt nast ikh tenger’ (Great heaven of the earth with long life) is an original Mongol role that cannot be found elsewhere. He is the master of land, water, and man, a spirit that existed in shamanism long before the spread of Buddhism in Mongolia. Also in Khüree tsam, there are roles of four deities called as Khanshaart Dörvön Lus or Donsh Döröv, representing the spirit masters of four surrounding mountains of the capital city.Buddhist tradition), the spirit master of Bogd khan mountain in the south, Gakhai khanshaart (Pig snout), the master of Chingeltei mountain in the north, Nokhoi khanshaart (Dog snout), the spirit of Bayanzürkh mountain in the east, and Khar Uuliin övgön (Old man of the Black mountain), the master of the Songinokhairhan mountain in the west. Other characters specific to Khüree Tsam are a Crow, and two heroes, Büüveibaatar and Shijirbaatar, with armour and weapons, reminiscent of ancient warriors, who are protectors of offerings from the Crow.

The tsam dance art is closely linked to the tsam mask crafts. One of the examples is the famous coral mask of Red Deity, presented in the chapter concerning the traditional craftsmanship. Besides wrathful deities, there are also calm and peaceful characters such as Tsagaan övgön (White Old Man) and Khashin Khaan (Khashin the King). The example of the Tsagaan övgön mask, which shows a happy and humorous face, is one of the most important creations of the Mongol tsam. It embodies a civil meaning in its actions and movements. Japanese researcher Kimura Ayako, who conducted comparative studies on tsam masks of different countries, stated: “Compared to tsam masks of other Buddhist countries, the Mongol Khüree tsam masks are the biggest in terms of size with the best design and most exquisiteness of costumes and decorations. Also, its ritual has the widest and the most in-depth meaning among tsam dances of neighboring Buddhist countries. Therefore, the Mongol tsam is one of the most precious ones among the others.” 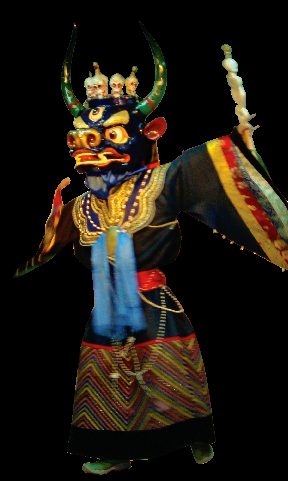