Tsuur is one of the ancient traditional musical instruments of the Mongolians. The tsuur is referred differently in music histories as ‘Mongol tsuur’, ‘Modon tsuur’ and ‘Hün tsuur’. The tsuur is a vertical wooden wind instrument, with three sound holes, similar to a vertical flute. Despite its visible simplicity, it is a masterpiece of the Mongolian musical heritage and it reflects the centuries-old tradition of creativity and ingenuity. Although the tsuur has only three holes, it can convey the magnificence of nature, its mountains, rivers, and wildlife.

Playing is a unique and rare phenomenon of blending the sounds simultaneously created by both the musical instrument and the human throat. It has a unique timbre that is not found in any other wooden wind instruments in Mongolia, as it is performed by touching the mouthpiece of a pipe (amgai) with the performer’s front teeth, creating a clear and gentle whistling sound, and simultaneously singing a vocal drone similar to the khöömei vocal technique at the same time. Therefore, the tsuur produces a unique and extraordinary musical sounds and melody.

The tsuur art is one of the interesting forms of traditional intangible heritage, being an example of ancient attempts to communicate with nature and speak to nature in its own language. It is not surprising that the it has originated among the ancient nomads inhabiting the northern and southern slopes of the Mongolian Altai Mountains. It has its origins in an ancient practice of worshipping the earth, mountains, rivers and their respective guardian spirits by imitating the sounds that were unnatural for human beings. Legend states that both höömei and the tsuur imitate the sounds of the waterfalls and streams of the mysterious mountainous Even River, which originates from a glacier on the snow-capped summit of the Altai Range. This river is believed to produce majestic sounds in different situations as the sound of a river with a high level of water, low level of water. The sounds also differ depending on whether the listener is close to the river or far away from it. Tsuur music has an inseparable connection to the livelihood and customs of the Uriankhai Mongolians of the Altai A region, and has remained an integral part of their daily life. Since antiquity, the Uriankhai have regarded the tsuur as “music of the spirit of the Altai Mountains,” revering it as a force to protect one’s ger from evil by placing the instrument in a prominent place near the altar. It was played on various occasions, such as when appealing to the spirit of the Altai Mountains for hunting success, when appealing for the benign weather in the case of natural hardships, when performing a benediction for a safe journey, or when performing at weddings and other festivities. In the territory of Central Khalkha ethnic group, people use the morin khuur (horse-headed fiddle) to coax mother animals to allow an orphaned animal to nurse, whereas the Urianhai people of the Mongol Altai region have a  to play such melodies as ‘Sarig tsagaan inge’ and ‘Beijing shar at’ on it in order to accomplish this purpose.It was initially made from a simple stem of a plant. Nowadays, the tsuur is made of a branch of a larch tree or a trunk of a white bush, split length-wise and grooved inside. The two parts are then joined and bound together, thus creating a pipe-like flute. In order to firmly attach the two pieces together a more sophisticated technology is applied, such as wrapping the pipe with the thin skin of a sheep’s or antelope’s esophagus. 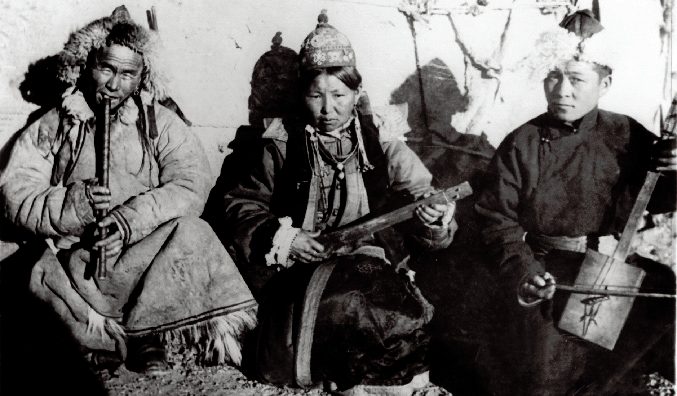