The meeting of the three great superpowers of the time – Britain, the Soviet Union, and the USA – to discuss the future of Europe, was held in Teheran on November 28, 1943. China was deliberately not invited to this meeting since in that case, the problem of Soviet-Japanese relations would have become awkward. However, the British and the Americans had already decided to hold talks with China on the future of Asia before the Teheran meeting. And so, between November 22 and 26, 1943, a few days before the Teheran conference. Roosevelt, Churchill and Chiang Kaishek met in Cairo.

The Cairo conference decided to force Japan to accept its post-war border as had been delineated in 1894, to return Taiwan to China and to put an end once and for all to the Japanese occupation of Manchuria and Korea. The most sensitive question was the issue of Outer Mongolia. Although the Soviets had overtaken Outer Mongolia and were reluctant to give it up, madam Chiang had told Roosevelt that China wanted this land back after the war. Britain and the United States did everything possible to skirt around this issue because they could not decide anything without the consent of Stalin.

The Americans had very little knowledge about General Asia. After its Consul-General had left Kalgan in 1921, the USA received no information about developments in Outer Mongolia. In the summer of 1944, President Roosevelt sent his Vice-President Henry Wallace to the Soviet Union, China and Outer Mongolia on a mission to gain some top-level understanding of Outer Mongolia, which was under Soviet influence, of the internal developments in Xinjiang, of China, which grumbled about the Xinjiang situation, and of the Guomindang and communist parties waging a war for government power in the future. The Vice-President was accompanied by a high-powered delegation which included the American sinologist Owen Lattimore, a scholar, and expert on Soviet-Chinese relations, who also spoke Mongolian, economic John Hazard, who spoke Russian, and the State Department’s China expert, Carter Minsent.

When Wallace landed in Ulaanbaatar on July 2, 1944, he was met personally by Choibalsan. Wallace was the first such high-ranking person to Visit Outer Mongolia. According to the American delegation, the Soviet influence in Ulaanbaatar was strong, with fifteen hundred Russians living there, but the national pride of the Mongols was much stronger. Most of the Russians had been sent out of town for a few of days just before the arrival of the delegation, most likely because of the Soviets didn’t want to give the impression that Mongolia was indeed a Soviet colony. The eradication of skin diseases in Outer Mongolia, the health of children, the status of education, as well as the factories which the Americans visited, and the people working there, gave striking evidence that Outer Mongolia, as compared to Inner Mongolia, had indeed made impressive progress.

In The Report to President, Roosevelt Wallace wrote: Wallace’s report

In Outer Mongolia, there is considerable evidence of healthy progress, military preparedness, and nationalistic spirit. Soviet influence is without doubt strong but political and administrative control appears to be in the hands of capable Mongols. Any though of resumption of effective Chinese sovereignty would be unrealistic.

On the contrary, it is well to anticipate considerable agitation in Inner Mongolia for union with Outer-Mongolia after the war.

The Alms of the Rich Reach the Poor

The group also visited Gandan monastery where they saw a handful of lamas and believers. The Americans had heard that the Mongols had destroyed all the temples and monasteries. They suspected the monastery they visited was a showpiece opened especially for their visit and tired to ascertain this. But they found that the lamas were still reciting prayers and that a handful of believers were in attendance.

The Soviet had warned in advance that the American would be coming and had told the Mongols to prepare for the visit. Bu the Mongols did not know why the Americans were coming. In Moscow several months before the visit of the Americans, Stalin querried Choibalsan regarding the monasteries: “Don’t prevent the people from saying prayers. Let them pray, believe, and meditate. You must also open temples and monasteries. But the lamas must be your own men. Do you have many lamas?. Naturally, Choibalsan answered, “We can find such lamas”. After returning home, Choibalsan, as instructed by Stalin, gave the people the right to worship. Gandan, one of the few monasteries which were spared major damage, was repaired and reopened and a few trustworthy” monks were assigned to hold religious ceremonies there. A couple of monks like Erdenepil and Gombodoo, who also worked for the Ministry of Internal Affairs, were assigned this important task. Stalin had suggested to Choibalsan, “you could also start religious ceremonies with the help of revolutionary monks, as we did with the help of Bolshevik priests.” The Karakorum and Erdene Zuu monasteries were also taken under state protection because they had also not been too severely damaged.

[The President] urge me to take Owen Lattimore with me, who, he said, was one of the world’s great experts on the problems involving Chinese-Russian relationship. President Roosevelt had long been fascinated by the tribes which for many hundreds of year have wandered back and forth what is now known as the Russian-Chinese boundary. He wanted me as an agriculturalist to observe how they lived on both sides of the boundary and to form some opinions [with, presumably, Lattimore’s guidance] as to how possible future causes of conflict between China and Russia might be minimized. He asked me specifically not to see the Chinese Communists because he thought that might belittle the importance of the special message which he asked me to convey to the Generalissimo.

Much credit goes to Owen Lattimore for giving the US Administration such a positive attitude towards Outer Mongolia. The Sinologist and Mongolist hoped once again to return to Mongolia after meeting with the leaders of this country, which for political reasons had been closed to the outside world. In 1947 he expressed to Choibalsan his desire to revisit Mongolia together with his wife and sixteen-year-old son. This request, on which a certain Sharav had written in red pencil, “The Marshal has instructed that this be preserved, “414 is indeed preserved in the archives. Many years later, in 1961, this friend of the Mongols did in fact visit Mongolia gain. Until his death, he chaired the International Association for Mongol Studies and supported the independence of Mongolia. In 1990, the year when the ninety-year-old scholar passed away, this “Stateline country”, to use Lattimore’s term, finally gained its freedom. 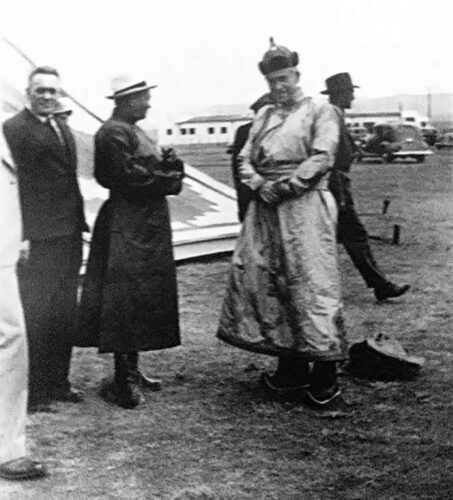