There are many items in Mongolia made by felt. Mongolian felt craft is very unique. Some example of the Mongolian felt craft is felt souvenir ger, felt sitting pad, felt yurt cover, etc. The patterns are made with ochre. The interlocking pattern starts from the middle portion of the drawn pattern, and then lines are drawn in horizontal and vertical directions. There can be many dots among the circular and square signs.

Felt stitching is one of the important technique in Mongolian felt craft. It serves other purposes than as a covering. It is also embroidered ornately with a technique called ger. shirekh, using thread made from camel wool, to make olbogor cushions and üüd or the felt door for a 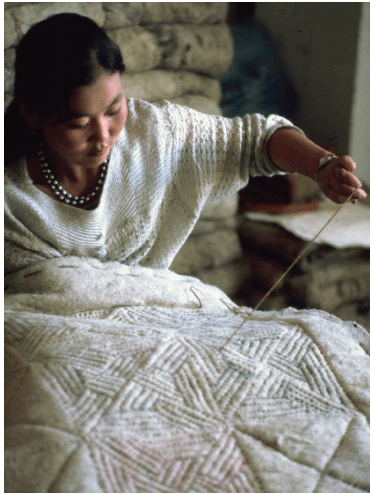 ger. These in turn are used as gifts or mats for guests. In this way, Mongolian art has an aesthetic as much as a practical function. The stitched-felt flooring for the Mongol ger is called dugaluur (circle) or toiruulga (circumference). Stitches have to start from the centre of the ornament, so that the felt doesn’t move. The stitching thread is not tied in a knot, but is instead quilted into the felt. Stitching distances must be equal and also close to each other. When stitching, the needle must be pricked perpendicularly to the felt, and the thread must be pulled with even strength. Usually, nevtgelzekh or “sewing with a forward stitch” is used for felt stitching. When using this stitch, the end of the thread is twisted, so that thread knots do not appear on the felt. When the stitches are made appropriately and meticulously, the top and bottom sides of the felt look the same. Camel wool hemming is sewn along the border of the olbog to reinforce it as well as to embroider it. Nowadays, the number of traditional sewing patterns or esgii shirmel are increasing, some of which include the toonoljin, ölzii, shurguulga, alkh and tümennasan khee signs, to name but a few. There are two main techniques to stitch the felt: stitch directly on the felt or stitch on a textile background that  is attached to the felt. As for the stitched-felt door, it is framed with blue, red, and brown textiles together with ornaments symbolizing protection and solidness, such as alkhan khee. The centre, in contrast, is decorated with cultural symbols or other types of ornaments, including ölzii and tümennasan. Moreover, ornaments depicting animals, such as dragon, gazelle, deer and other legendary animal figures are widely used in ger decoration. They typically use woolen-thread felt stitches as well as coloured woolen stitches. Felt-stitching has different styles according to the practices of the many ethnic groups of Mongolia. For example,the central Khalkh, Kazakh, Torguud, Zakhchin and Myangad esgii shirmel are very commonly found. Interestingly, some esgii shirmel has a spiritual meaning for the Mongolians. For instance, tolog, a small felt rug with special patterns, is used for easing the pain of a mother delivering a baby.

Interlacing
Dees rope is made from the wool and tail hairs of large live is a rope twisted in the shape of an “S” or “Z.” these stock animals. Dees are used for making ropes that are interlaced or attached to one other. The interlacing is classified as single, double, black, variegated, and so on. Various types of interlacing, such as khoshlon (doubling), guramsan (thrice doubling), and dörömsön (fourth-doubling), serve both artistic and practical functions. Mongolians have even invented a mechanic spinner for interlacing. The traditional art of creating images with dyed wool has almost been forgotten, but luckily this tradition has been rejuvenated by several contempo 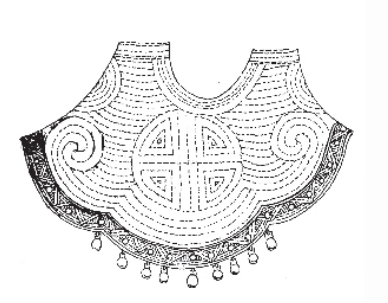 rary artists. Among the new works are “White Fog” and “Flower” by B.Bayandüüren and “Blossoms” by S.Saran. One felt-maker and artist, Ts.TsendAyush creates her own dyes from different plants and has been awarded the UNESCO Award of Excellence for Handicrafts of Asia for her work. 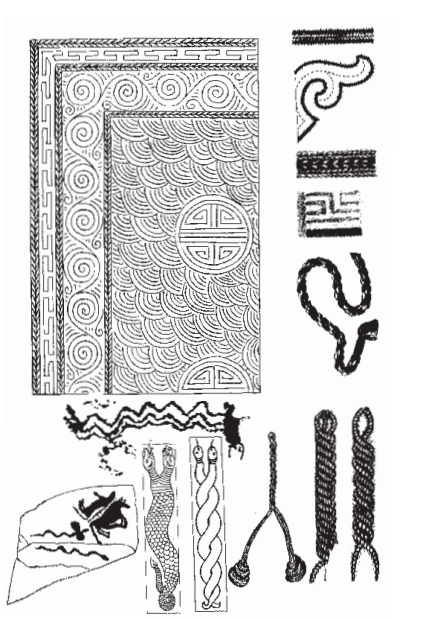