Melodies To Cause A Mother-Animal To Accept It’s Young

Traditions and rituals related to animal husbandry hold a major position in the Mongolian traditional practices and customs. One of the most important is the singing meant to cause a mother-animal to accept its young. This special practice relies upon a unique form of psychological relationship between humans and their domesticated animals. The practice calms animals with harmonious singing and lyrical music, which is meant to form or strengthen the bond between the mother and its offspring (or an unrelated orphan offspring). This practice is used in the following contexts:

a) When making reconciliation between an offspring and a mother-animal which has rejected her offspring;

b) When building a relationship between a mother-animal and an orphaned offspring;

c) When building a relationship between a mother-animal which lost its offspring and another offspring animal.

In the process of causing the mother-animal to accept its young, traditional instruments, such as morin khuur (horse-headed fiddle), limbe (horizontal flute) and tsuur (vertical flute), are used together with the lyrical recitations of poems, phrases, and song, such as urtiin duu (long song). It is believed that the harmonic melodies and pleasing phrases touch the animals’ psychology and stimulates the animals’ natural instinct for loving the offspring. This is an interesting connection between animal herding and Mongolian folklore. The need to cause a mother-animal to accept its young is relatively simple for domesticated animals (bog mal). The herder melodically and lyrically recites poems and sayings to the mother animal with the aim of influencing her through the magical power of words and melodies. Such poems usually relate the indispensability of feeding the offspring to the natural flow of the seasons and time. For instance: 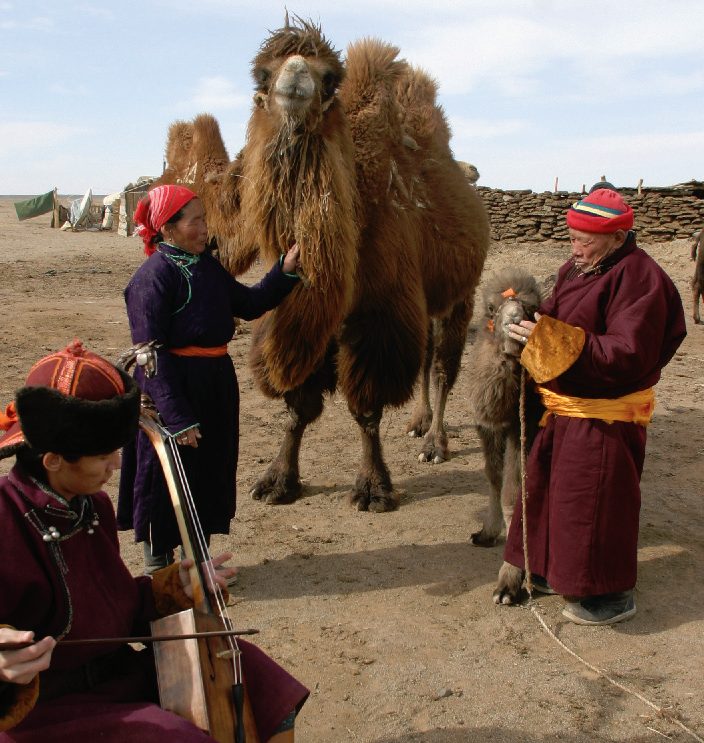 Various local dialects are used for this practice, which includes toiglokh (to call a ewe to accept its young) and tüshgerekh (to smear the lips of a ewe), for sheep, cheeglekh, and tseeglekh (to call a nanny-goat to accept its young) for goat. There are even certain occasions when herders can bring about a mother-animal a relationship is between different species of animals, such as a lamb and a calf. When we cause a cow to accept its young (calf), the herder traditionally uses an improvised melodic song similar to a besreg urtiin duu (a mini long song) to get the animals used to each other.

The most difficult animals to work with are the mare-camels. When performing this practice with a mare-camel, musical instruments, such as the tsuur, horse-headed fiddle, or flute, are used with the help of hööslökh (to sing to a mare-camel) and other melodies. The main way to soothe a mare-camel is to utter hööslökh in melodious ways; and if this doesn’t work, the herder will sing songs and play melodies that aim to touch the feelings of the male camel. This practice requires the involvement of a singer or musician who bears the traditional performing arts. If there is no such a person in the area, the herder can bring such a person from a different place. In such occasions, the herder and singer or musician is engaged in causing the mare-camel to accept its young.