Organizing and enjoying horse races is an important part of the annual Mongolian festivals. Horse races are a unique tradition involving horses and jockeys. The tradition includes singing the long song before and after the racehorses, reciting titles for the first five horses, and singing jockey songs meant to encourage and relax the horses before the race. In general, the jockey songs are like anthems for the jockeys. When chanting a jockey song, the word ‘giingoo’ is melodiously uttered and sung like a song with great cheer. Researchers note that these songs share similar features with urtiin duu songs. The giingoo songs use a unique melody that links humans and their horses and helps for them to understand and to cooperate with each other. When a good chanter sings a jockey song, not only his horse gets encouraged, but so do the people and other animals in the vicinity become encouraged. 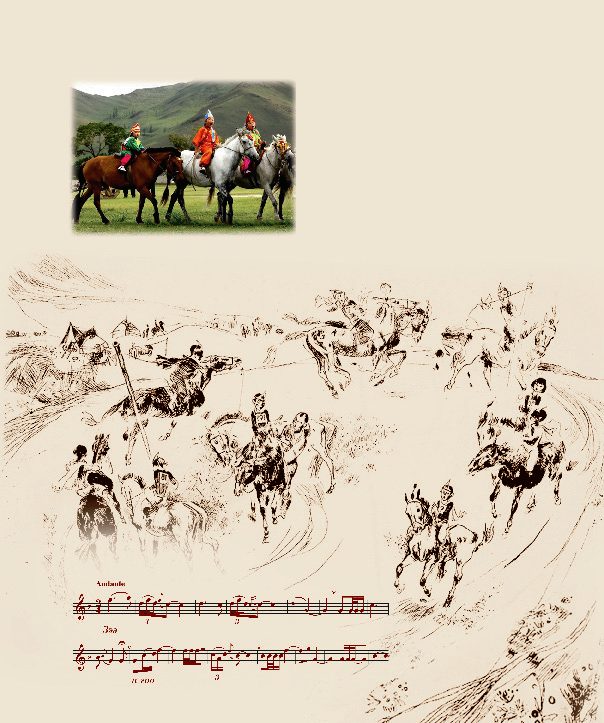 The horse-title recitation is a melodious verse of praise and well-wishing that is chanted for the first horses that reach the finish line in a horse race. This is a unique form of the ritualistic praise poem. During this ritual, the horse is driven three times around the main tent where the festival organizers stay, while, at the same time, the horse titles are recited three times as well. At the last recitation, the horse owner and jockey are treated with airag (fermented mare’s milk). The owner is given a drink while the horse head and loins are sprinkled with it. This is why the first horses in the race are called as airgiintav (the five with fermented mare’s milk). Reaching the top position in a race is called airagdakh (to have airag). Each title of the first five horses shares common features, yet they also have slight differences. Each horse title is started with a statement of the horse’s place of origin and the name of its owner. As for the winner, following the first statements, the title goes “Out of myriad horses, this one shows its perfect speed and flies like a hawk and becomes the first-comer.” It continues by defining the characteristics of the horse:

This part describes the features of the horse when it gallops in the race. In another version of the race-winner a title, the horse is depicted as it stands:

It has four sparkling elephant-canines
Stretching its cervical vertebrae
Alternating its span-sized ears
Challenging its round black eyes
Swaying its hare-shaped back
Moving its agile body freely
Sweeping its bushy mane
Swinging its long tail
Dancing its four hoofs nimbly
Flying its excellent four legs
It describes the horse’s characteristics with movement.

The title of the second-place horse is almost the same as that of the winner. Yet it lyrically describes the contesting a way in the race as the first part says:

The swift horse
Which spurted through
The front of the spectators
Like a whirl-wind
Demonstrated its
Strength and sinews;
Once again
Leaped
And challenged
Again spurted
Almost overtook;
It raced and again spurted
But failed
Now it is the runner-up

It describes the competitiveness of the horse in a detail. It continues:

This year,
It is the runner-up;
Next year,
It shall be a winner

The fun and joy of these festivities are evident in the praise songs sung for the worst-performing horses’ in these races, songs which are called ‘Bayankhodoodnii tsol’ (Booby-prize blessing). The worst racer in the race of two-year-old colts are identified as Bayankhodood and brought on the festival ground with its child jokey and feted like a winner.

Then a cooked stomach of sheep is attached to the saddle thongs and the title is recited as:

Because of the confusion of
The owner of this racer,
Who made a mistake in training,
The Jockey
Was too small [and]
His whip
Was too short;
This horse always finds
All of the holes in the ground,
And the many knolls and burrows
Along the way;
There were a certain number of sandy knobs
There were certain swerves;
The start was jumpy,
But it finishes behind like ox-cart;
It is the booby-prize winner.
It will certainly be a winner at next year’s race.
It is the racer that will become the best
And it will be the winner of next year!

In this recitation, there is an implication of sarcasm and of friendly criticism of the horse trainer, who, it is believed, lacked the experience to train the yearling horse and the horse’s jockey. The festival becomes amusing and entertaining with this recitation. The horse trainer and jokey will usually feel ashamed in the crowd during the recitation of this blessing. But the booby prize winner must stand next to the winner and display an arrogant behavior, which causes incredible merriment at the festival ground. 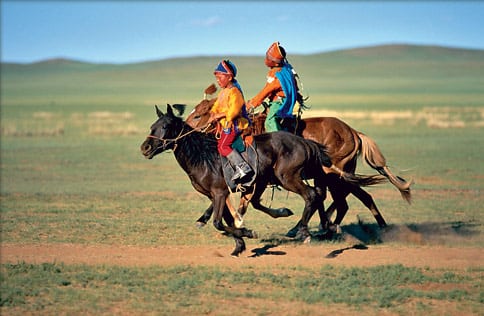