Soviet influence in Mongolia involved more than terror and class struggle, though the terror touched the lives of virtually every family in the land. But in spite of the terror, as a result of the Soviet presence, this isolated land was introduced to modern medicine, art, and education. According to the agreement of 1929 signed between the USSR and MPR, the USSR would send doctors, medications, and expeditions to Mongolia to help in the development of public health and veterinary service. At Mongolia’s initiative, the Germans had helped to lay a foundation for manufacture in this backward steppe country and had helped train national personnel, and the Danes had begun to teach modern methods of agriculture.

The State Transportation Board, which had twelve trucks, was revamped, becoming the Mongolian – Soviet shareholder Mongoltrans. In 1930 Mongoltrans had fifty trucks; in 1931 it possessed 121 Russian trucks. The Nalaih mine, with a capacity in the foundation of five million tons, was expanded and modernized in 1930. As a result, the mine produced six to seven thousand tons of black coal each year thereafter.

Preparations started for the construction of a wool refinery in Hatgal, a production plant in Ulaanbaatar and a facility called Mongol Rabfak (workers facility) was set up Ulaan Ude for training workers. One of the first students there was Tsedenbal, who would later become a political leader. Over the next years, more than four hundred workers were trained at Mongol Rabfak. Small handicraft industries were set up for making furniture for gers (or yurts): stools, tables and household utensils. In 1930 a Handicraft Cooperative was founded and all these small industries were subordinated to it. The first group of Soviet experts- doctors and veterinarians, as well as those on geological expeditions – started working in Mongolia. In this way, the nomads gained their introduction to twentieth-century civilization. 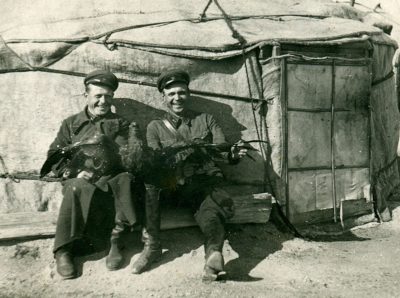 Until the 1930s no systematic educational structure existed in Mongolia. Once Soviet power was in place, unprecedented progress was made. New schools opened in several places and the Teacher Training College in Ulaanbaatar was founded. A state educational structure was formed for the first time during the 1930s and within a few years, the nomadic people had became educated and were gradually involved in the educational system.

At the beginning of the 1930s, a public health maintenance system was formed in Mongolia with the arrival of the first groups of Soviet doctors who helped set up a local healthcare network. In 1927, only fifty hospital beds were available in the country. In 1934, there were 326 beds. During that time the number of European trained doctors rose from seven to 139, and the number of a nurse rose from three to 138.

As the population became liberate, books and newspapers were printed. Many papers were titled according to their organization: Soldiers News, Women’s News, Monks News, Students News, and so on. Before this time, few newspapers had been printed. Also, foreign language books started to be translated into Mongolian. Needless to say, these included the works of Marx, Engels, and Lenin, but also classic works by Daniel Defoe, Jack London, Jules Verne, Jonathan Swift, Edgar Allan Poe, Chekov, Tolstoy, Pushkin, and others were read for the first time.

After reading such great works, many Mongols wanted to become authors themselves. In 1929 the Mongolian Writers Union was established. Most of these creative works praised the Party and the government and criticized the primitive nomadic way of life. They were a form of propaganda. While the works themselves were rather primitive, talented writers such as Natsagdorj, emerged. Under the influence of such writers, Mongolia’s modern literature scene was established.

During the 1930s, some European musical instruments made their way to Mongolia, and concerts were performed by military bands for the first time. Though these performances were for propaganda purposes, still the nomads were exposed to the instruments and their sounds. Western instruments were also used in theater and drama and became very popular.

In 1931, the Mongol People’s Cultural Theater was built, and here some European dramas (with multiple acts) were presented. Also, some of Natsagdorj’s poems were set to music, including an opera, The Three Hills, with music by Damdinsuren, which is still popular today.

Movies had been introduced in Huree. During the Bogd Khan’s time, and the American “William Brothers” set up the first movie company in Mongolia. The first cinema was built during the 1930s, and in 1933 a bureaucratic Cinema Committee was formed. Cinema expended to become the twentieth-century wonder of the dark sleepy steppes. 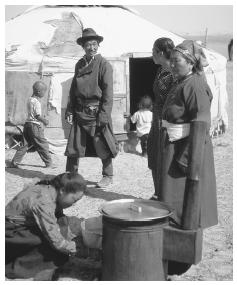 The Mongols had only know wrestling, archery, horsemanship, and a shagai-the game played with anklebones of sheep and goats. During the 1930s Mongol students at Rabfak were introduced to skiing, skating, volleyball, and soccer.

The development of the healthcare and educational network was hampered by the lack of a transportation system and by the outdated administrative structure, which had preserved for seven centuries the horse-relay service founded by Genghis Khan. The USSR, however, having established its monopoly in the Mongolian raw material market, needed to simplify the administrative units to facilitate the collection of raw materials. Also, the Secret Police Network created throughout the country required a quick information supply and distribution structure. For these reasons, the administrative structure which was more suited to pastoral livestock breeding underwent a change at the beginning of 1931. The administrative structure of the time had been preserved for more than four hundred years by the Qing Dynasty, and at the beginning of the 1920s, only the names were changed. The dub-unit of the hoshuu was completely eliminated and replaced by 324 sums. Within the process of this renewal the colossal work of defining borders, distributing the population of sums and setting up sum administration continued for over a year.