Mongulai
May 2, 2019 History of the Mongols, The Arrival of the Tibetan Buddhism 0 Comment

The Sakyapa school, which had been approved by Khublai, had all but died out. Geluk, or yellow, Buddhist was looking for foreign military aid and moral support. Mongolian feudal rulers and Tibetan yellow Buddhists found each other.

In 1578, Altan Khan welcomed the Tibetan yellow Buddhist leader Sonam Gyamtsho, and so the 3rd Dalai Lama gained the opportunity to stand against the other schools of Tibetan Buddhism with the support of the Mongol Khans. Altan Khan needed yellow Buddhism to defeat the Oirads and show his might to other Mongol tribes.

Inner Mongolia was the first time to embrace yellow Buddhism. This triggered a vigorous race. Among the self-important and unruly Mongol Khans for winning favor with the Tibetan church as well. The Oirad, who were supposed to be destroyed by Altan Khan with Tibet’s blessing, immediately adopted the yellow religion themselves.

On the site of Genghis’ former capital the Karakorum, in the valley of the Orhon River and the focus for generations of nomads, Avtai Setsen Khan built the monastic complex of Erdene Zuu and consecrated the god Gombogur.

As yellow Buddhism became popular, the first Buddhist temples were built. Its first temples, besides being small, perfectly suited the nomadic Mongols, since they also could be transported.

Laws were adopted to weed out shamanism. Much effort was exerted to do away with the shamanistic rite of killing slaves and servants together when their masters died so that they accompanied the dead to the next world. Whereas learning Buddhist prayers and showing religious zeal became deeds officially commended, the administration of shamanistic rites was now eligible for fines and other forms of legal prosecution. But efforts to eliminate the worship of the spirits of mountains, waters and the like, to which generation upon generation of nomads had become accustomed, proved unsuccessful. The problems the Tibetans had with their ancient religion bon while trying to switch to Buddhism were repeated with Shamanism in Mongolia.

Tibetans themselves helped convert Mongolia to Buddhism by sending battalions of Buddhist monks there. A great effort was made to translate books such as the biographies of Milarepa, Lama Molom and others so as to disseminate the teaching using the simplified forms of legends, and biographies of Buddhist sages and saints. Sakya and Karma Kagyu, both rivals of the Gelug school, wished not to be excluded from the process and also sent missionaries in great numbers.

Until 1642 the sent of the Dalai Lama was held by the Yellow Hat Sect. When Altan Khan bestowed the title of Dalai Lama on the head of this sect, he claimed both political and religious sovereignty. But of course, the other schools would not allow him to assume leadership of the  State without a fight. As the Geluk grew bigger with Mongolian support, the opposition of the Karma Kagyu grew stronger. In 1610 a Tibetan prince Phuntsog Namgyal captured the monastery of Bereweng, one of the important centers of the Yellow Lhasa to ensure the smooth enthronement of the fifth Dalai Lama, Lobzang Gyamtsho. Seeing this, and wanting to make use of the Mongols’ military might, the Karma Kagyu clergy hastened to launch a powerful religious campaign in Mongolia. By then, however, the rulers of many Mongol khanates had already embraced the teachings of the Yellow sect.

Yellow Buddhism as a Weapon

The Chinese were eager to encourage the Mongols to accept Buddhism. Besides, the Chinese had openly supported the Yellow religion since the Ming times, and the newly-established Manchu rulers continued this policy. The Manchu had been quick to understand that the savage and warlike Mongols could be rendered meek through the inherent passivity of Gelug teaching, and so they facilitated its spread in Mongolia in every way possible. Declaring that Manchus, too, we’re embracing it, the Manchu emperor began steering a course to set an example for the Mongols to follow. He also wanted to make use of the aspect of this religion that provided for unpredictable reincarnations, and to establish himself as the embodiment of the god Manjusri, thereby strengthening his influence. As proof of the publicized conversion, lames were brought from Tibet and a Gelukpa monastery was set up at Mukden. However, upon achieving their objectives, the Manchu quit Buddhism and, converting to Confucianism, were absorbed into Chinese culture.

The painstaking efforts made by the Qing Dynasty to spread the teachings of the Yellow religion among Mongols were a continuation of the policy once implemented by Ming China. A provincial perfect during the Ming era, Wang Chonggu, had written in a report to his sovereign, “the Yellow Religion forbids shedding of blood and killing of sentient be pacific and accommodating. We should encourage in every way possible the spread of this religion among nomads. 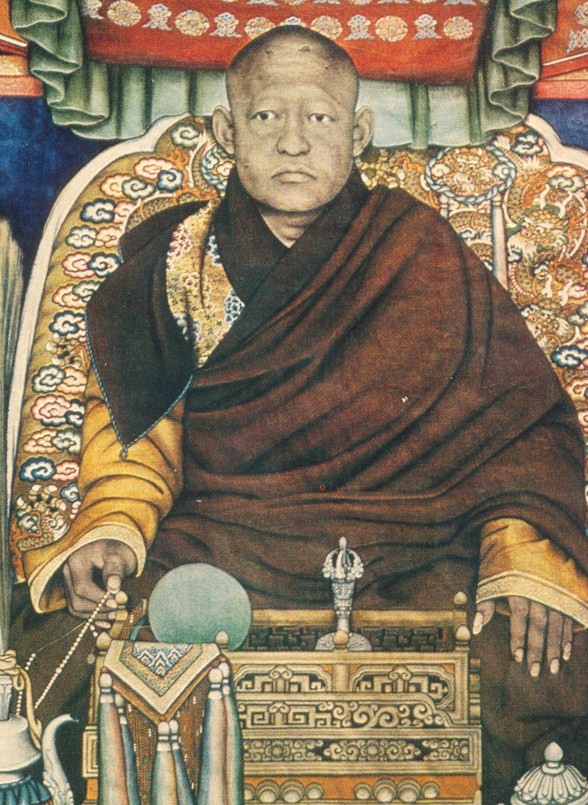 Avtai Han spread the teachings of the Yellow school of Buddhism in Mongolia. His grandson from his son Gombodorj was declared as the leader of the Mongolian religion and the reincarnation of Taranatha. When he was proclaimed as the first Bogd Javzandamba, the Qing Dynasty had much to do with the affair.

A huvilgaan is a reincarnated god born into this world in human form to bring the message of salvation to the suffering mankind, and being immortal is reborn over and over again. Before the son of Gombodorj was identified as a living Buddha, huvilgaans such as Zaya Pandita of the Oirad and gegen (a respectful term for incarnate lamas, usually translated as “Supreme Holiness”) Donhor Manjusri had been born and had already taken their appropriate places. The Mongol feudal lords themselves hoped that with the establishment of the Javzandamba Hutagt ( a hutagt, or khutkhu, is a reincarnated god), Mongols would at last come under a central religious and temporal government.

However when Bogd Javzandamba supported the Mongolian opposition to the Qing Dynasty, Beijing decided not ot appoint a Mongolian as the leader of the Mongolian religion. from the 3rd Bogd, all of his reincarnations were recognized in Tibet and only later brought to Mongolia. After being born in India 10 times, in Tibet 5 times and in Halh only twice, Taranatha was to be born in Tibet by the order of the Qing Emperor.