Afujilo (492-496). one of the rulers of Tele. A subject of the Rouran Empire initially. Even though he frequently asked Deulun, an emperor of Rouran, not to make a fight against tabgach Wei dynasty, he did ignore his warning. So Afujilo mounted a campaign and moved to the Irtysh River leading his tribes. He ruled 100,000 households. He broke down the Yueban tribe of Xiongnu origin and occupied the Semirechiye region. Afujilo divided his state into two parts, ruled the North personally, and then granted himself the title “The Great Emperor”. In 496, his state was destroyed by the Ephthalits.

In chapter 110 of the Shiji, writes about Xiongnu that they moved in pursuit of the best pastures and water and they had no walled cities or permanent settlements. Even though they did not practice agriculture, each of them had separate domains.

Some ancient Chinese sources note that they did not build a permanent city and did not run any agriculture too. As a result of these facts, most scholars and researchers have been aware of the same thing just above mentioned. Kh. Perlee, as a discoverer and researcher of the Xiongnu cities and settlements, emphasizes the Xiongnu those Chinese historians, and researchers especially some modern orientalists, wrote that the Xiongnu had no city and collected reserves and goods by the second half of 3rd c. BCE, they moved the following water for all the year and firstly proposed a dogmatic about _ “Asian pure nomads”.

One of the Mongolian senior archeologists, Ts. Dorjsuren suggested that the above-mentioned theory of absolute nomadism of Xiongnu is likely based on a note in Chinese sources: “The Xiongnu has been considered to be merely herdsmen. They always moved in pursuit of water and pasture, with their livestock animal”. However, Soviet scholar S.I.Kiselev underlined “The unlimited dominance of this doctrine caused many researchers and scholars to ignore the facts and evidence of the existence of settlements in the land of present-day Mongolia”. Another Soviet scholar, A.V.Davidova drew a conclusion on the materials of the Ivolga settlement, dated to the Xiongnu period “According to the research work, the inhabitants had run out the agriculture since ancient times, so that it is impossible to say that in Central Asia only nomads were pastured the land”. Most researchers and scholars say that these few notes “The Xiongnu were a merely nomadic tribe” in Chinese sources, must be dated to the early period of the Xiongnu-China relationship. in other words, it can reflect the period of the pre-settlement in Xiongnu.

Kh. Perlee noted that new discoveries of cities or settlements in Mongolia do not fit with the information recorded in Chinese sources, and emphasized the new discoveries of settlements that are mentioned in these narratives. Also a Mongolian scholar, G.Sukhbaatar said “The saying in Shiji, that the Xiongnu do not run out agriculture, is to say that they mainly run out animal husbandry but not to say they never practiced out agriculture”. Most of the Xiongnu scholarships agree with this point of view.

The Chinese source indicates that in 119 BCE, Wei Qin, a Han general reached Zhao Xin Chen city in the Tianyan Mountain, ate the grain, stored by Xiongnu there, and burned the rest of them all. This stored grain noted in the source is bristlegrass, a sort of millet. 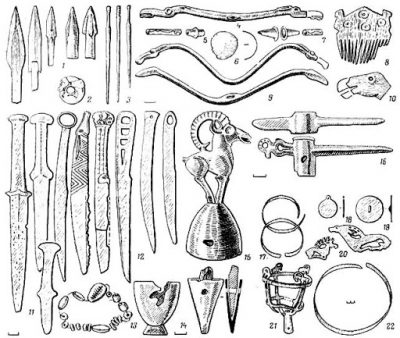 A fact dated to the year of 100 BCE says about there was a big hole to store grain in Chanyu’s palace and in the note of 90 BCE says about livestock animals were perished, people were ill in mass and the grain did not grow because of heavy snowfall for months. We have some other direct and indirect information concerning Xiongnu agriculture. For example: in around 83 BCE or in the early period of the reign of Huyanti Chanyu, there were revolts of local noblemen and attacks from Han Dynasty, as the Chanyu was too young and was illegally throned as a Chanyu and his mother Yanzhi was not reputable. At that time, the advisor of the palace, Wei Liu gave the advice to build a city with wells and walls surrounding it, erect a tower for storing grains, and protect the city together with the Qin people. In this case, the soldiers of the Han Dynasty could do nothing. In addition to it, Zhao Xin Cheng city, destroyed by the soldiers of Han in 119 BCE, can be noted. However, agriculture was developed sufficiently, and eventually not able to cover all food consumption in Xiongnu. Xiongnu took many measures to meet the demand for agricultural products. Judging from the facts above mentioned, at first, they tried to control some south-western city-states which complex agricultural-pastoral economies for the purpose of supplying their needs. A fact related to it is noted in Han Shu, that since the allied troops of many city-states in the west, mounted an attack on Cheshi city state-an ally of Xiongnu in 66 BCE, the Xiongnu were in disgust and decided to send both of east and west Da Qians with over 10.000 soldiers for each, to attack Wusun and its domains and to guard themselves against them or to take up a quarter and to run agriculture there too. According to the source, the west was the main place, where the Xiongnu wanted to extend its domains and according to the words of a military commander of a Xiyu (West region) originally depended on Xiongnu. Zhichi prince of the west wing of Xiongnu generally controlled the states in the West region and appointed a governor titled Dunpu Duwei, to take the products from agriculture as a tax or duty. we have no adequate materials to prove that the agricultural products, imported from the West regions played a major role in the Xiongnu economy.

An interesting and uncommon objective fact concerning the agriculture of Pre-Xiongnu is a mattock which was found at Xigoupan burial place in Inner Mongolia, dated to the period of the Warring States. This shows that agriculture was influential in the economy since the time of the Xiongnu culture formation.

G.P.Sosnovsky and A.V.Davidova discovered and researched the main material of Xiongnu agricultural culture, in the Ivolga settlement. Also, they found spade-2, ploughshare-1, reaper-1, bone mattock-1, mill stone-5, and some holes which may have stored grains. The tools are the findings from only 7 of 54 dwellings in Ivolga settlement, which means there were at least 7 families run agriculture.

Two grain-thresher stones like the above mentioned were found from the 105th dwelling in the Boroo settlement, in northern Mongolia, in 2007. In addition to them all, there are numbers of the tools used for agriculture such as 1 iron share of shovel just similar to one of the Ivolga settlement, found from 28th grave, Derestuy, Transbaikalia; 26 iron plowshares and 1 iron reaper like the Ivolga’s from the settlement of Xiongnu, Durney, the South of Transbaikalia.

G.P.Sosnovsky found seeds of millet from 40th and 123rd graves, in the Ilmovaya Pad’ and one of “Mongol amu” or millet (Panicum miliaceleum) from the graves of the Noyon Uul. Apart from the millet seed, found from the Ivolga settlement, the discovery of two sorts of grain those are barley (Hordeum vulgare L.) and wheat (Triticum compactum, Triticum aestivum) is significant to advancing the knowledge of sorts of grain.

As a result, the question “Which people ran the sedentary agriculture in Xiongnu?” is regularly asked. There are two hypotheses some native Xiongnu or some settlers in Xiongnu for a certain reason ran agriculture. But we have not had any facts to answer this disputable question today, although many Mongolian and foreign scholars and researchers say much about it. According to the present level of studies, some of the Xiongnu might have settled down in a place and become peasants and craftsmen. Of course, the main economy of the Xiongnu was pastoral animal husbandry. But it can be said that agriculture played an important part in their life and they tried to develop agriculture for their own needs.

As a model, the cities and settlements of Xiongnu helped the development of sedentary civilization in Inner Asia. The Xiongnu did not prefer merely a nomadic lifestyle but they, as a sedentary lifestyle, developed a complex enterprise including agriculture and craft which is considered to be the first step to supply their needs. Although we can not answer the question regarding how successful their attempt was, and which role the settlers played in the Xiongnu society, we can that the Xiongnu were the initial nomadic tribe who develop the city with the purpose and plan.

Being mostly incompatible between the information about the cities and settlements of Xiongnu, in written sources, and the settlements or sacrificial places, which have been discovered, like geographical location, shows that the cities and settlements were built in the land of Xiongnu at that time. But nowadays, some archeological research denies both of the views that the Xiongnu were really nomadic and Chinese source information, compared with their sedentary lifestyle, and requires we should do research work in classification, in further.