Occurrence of the Stars

The moon and planets move above almost every livestock cant matter to include on a calendar. This moment is underbreeder’s head. Each herder knows the motions of the stood as testing visibility. The visibility and movements of moon and the planets. Our ancestors used to prognosticate the moon and the Pleiades were like a calendar for ancient the weather conditions by the motions of the moon and the nomadic people: later, this served as the basis for the modstars. The Pleiades are invisible in summertime. But they ern Mongolian calendar. This observation became a criterion look visible on the 21st of the month at the beginning of au- for proving things to be true. There is a saying among the tumn, 19th of the month of mid-autumn, and on the 17th of Mongolians: “If you do not remember the date, look at the the last month of autumn; they are visible again on the 15th moon and the Pleiades’ visibility. When the moon and the of the month at the beginning of winter and on the 11th of Pleiades are visible, there are a myriad of stars.” Mongolians the last month of winter; and visible on the 9th of the month have the saying, “When Orion produces stars, the Pleiades at the beginning of spring and on the 7th of the month in produces yearlings”.  the middle and on the 5th of the last month of spring. They look visible by decreasing 2 days. Then they are visible on the third of the first month of summer. Then they are invisible till the autumn.

Mongolians observed the changes occur in the weather while the moon and Pleiades visit or look visible while they visit.

If the Pleiades appear above the moon, the weather breaks, even natural calamity occurs that year. If the moon appears above the Pleiades, then the weather will be pleasant. Particularly, the intersection of the moon and the constellation Orion on the 15th of the first month of winter is very important. Our ancient astrologers paid great attention to this moment. According to this information, it is a signifi-

here are rock drawings which were done 2,000-4,000 years ago. There are Bronze Age coins. On Hünnü era tombs were find animal figures representing the twelve year cycles. There are also similar sources about naming years, months, days, and hours by using animal names. This is a very old tradition starting from the Hünnü people who are Mongolian ancestors. Based on the recurrence of the sun, moon and planetary motions, Mongolians drew up a table of sixty cycles, periods, years, months, days and nights. They reckon twelve as the basic type and increase and decrease it in order to make it compute time and date correctly. Then they composed a table of the sixty cycles and use it for their everyday lives. According to the Mongolian chronicles, 60 years equals to one jaran (epoch) and twelve years is one period. The year of this epoch is called using animal types, such as  mouse, ox, tiger, rabbit, dragon, snake, horse, sheep, ape, hen, dog, and boar. The year is divided into months. They are also named according to animals. The traditional month is divided into two parts, identifying the beginning and the 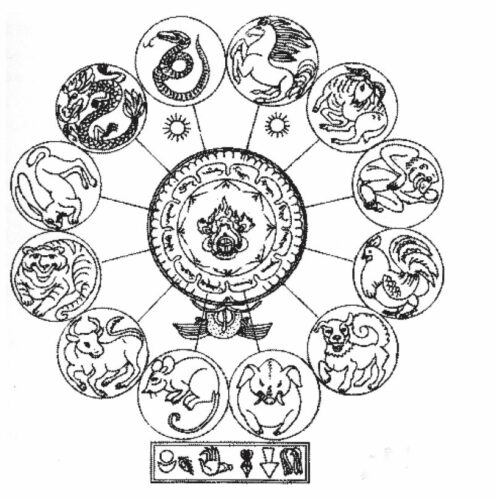 Mongolian ger is understood as a solar clock

Mongolian ger is constructed according to Mongolian astronomic knowl-edge. It is a very peculiar dwelling of the world. The frame of the ger is constructed to apply appropriate direction of the sun to civil life. It is possible to say that ger was the solar clock of the nomadic Mongolians. The traditional ger was elaborated since ancient time through the thirteenth century and its present form displays the influence of the solar clock. The nave of the crown’s frame is connected with eight bars connected to the rim of the crown of ger and divided into four parts at 90 degrees. The nave is called small wheel. The rim of the crown is divided into twelve parts at 30 degrees. These are equal to the hands of the clock. 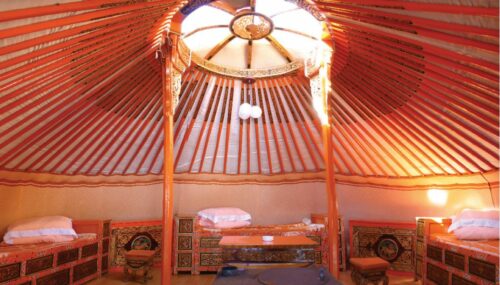 The cross-barred crown has portions. They are linked to the solar clock. One day is divided into morning, lunch, midday, afternoon, sun slanting and dusk. Every trellised wall has 14 cross-barred heads (the upper part); the total numbers of cross-barred heads of walls are 56. There are four spokes which are fixed on the lintel of the door. They are 60 end, each of which consists of 15 days. The month consists of four weeks. One khonog lasts twelve hours, and each khonog is named by the twelve animals. One hour according to the old almanac is equal to the present two hours. The khonog is divided into sixty parts or chinlüür. A chinlüür is 6 breaths (amisgal). A single breath or amisgal consists of 67 moments; the moment consists of 707 dens. This breath is approximately four seconds. There are greater and lesser months. The great months consist of 30 days; lesser months consist of 29 days. The Mongolian Lunar New Year falls on the end of the winter month or at the beginning of spring. The commemoration of this day has an ancient origin. Pieces of total spokes. The holes on the rim of crown are 60. The space between the holes on the rim and cross-barred heads of the trellised wall is at the angle of 6 degree. These are equal to the minute-hand of the clock. The sun radiates through the crown ger; this portion of the radiation is calculated well. When Mongolians erect their gers, their doors look a bit south-east. If we divide the circle of the ger into twelve parts, with the space between each point being 30 degrees, then the resulting form is similar to the diagram of the Kidan Zodiac.