Eagle hunting became a very famous festival in western Mongolia. Researchers believe that the tradition of eagle hunting originated among Central Asian nomads about 7,000 years ago. Mongolia is the best country to preserve this tradition. This time, we spoke with B.Dalaikhan, a resident of Altai soum, Bayan-Ulgii aimag, a representative of the eagle hunter who is contributing to the development and promotion of bird art in our country.

“Good Morning” Please introduce yourself to our readers?

Good morning. I am a citizen of Altai soum of Bayan-Ulgii aimag. I was one of the first people to organize the Eagles Festival. This is the 20th time this year that we have not skipped since the first competition. I am happy to see that the number of our eagle hunters is growing and getting younger.

“Could you please talk about the eagle you’re holding?”

This eagle is four years old. It is in his fourth year of competition.

How long does an eagle live?

From ancient times it is believed that eagles live about 30 years and are bred at the age of four. So we use an eagle for hunting for 5-10 years and return it to the wild.

How many eagles have you been domesticated since you became an eagle hunter?

I have been hunting eagles for 36 years. During this time, about 20 eagles were caught. Not all eagles are warriors. There are also problems with injuries when hunting. Due to such factors, there are cases that I released back some eagles into the wild in a short period of time. 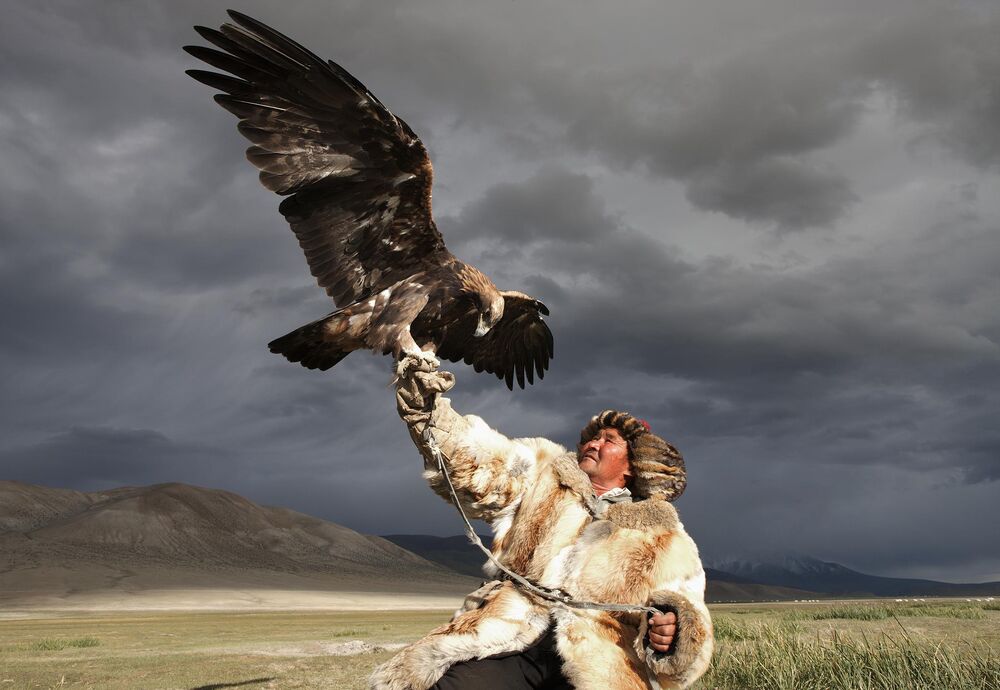 How many hunts did this eagle?

So far only one fox has been caught.

Every job has its challenges. What are the challenges for eagles?

There are no such problems for me. Because of my hobby of catching eagles, not every problem is considered a problem.

Recently, due to the development of tourism, many people have become accustomed to eagles. Do you consider eagles as a source of income?

“I’ve been an eagle hunter since I was in my twenties.” When I was young, my uncles used to catch eagles. I used to come along with them. The eagle encourages me from within and makes me happy. I can’t imagine anything else.

Recently, the art of Mongolian Kazakh bird hunting has become well-known in the world, and it is grateful that many tourists come to our country to see it.

Some say that the use of eagles in tourism may reduce their numbers. As someone who has caught an eagle for many years, what is your explanation for this?

I think it would be wrong to make such a conclusion. The eagle is a celestial being. The female eagle stays with the chicks for about a month and after 20 days until they can fly and find food by themselves they are trained to hunt. Later, when the birds return, they take their chicks about 500-1000 km away on a windy day. The mother eagle leaves them in the wild and returns to the mountains of his possession. This means that the mountain eagle never leaves its own nest. However, chicks left in distant areas adapt to their new habitat and remain there. Some return to their homeland. On the contrary, chicks born in other places follow their mothers in the same way. In this way, the eagle naturally maintains its population and ecological balance.

What kind of hunting is usually done by eagles?

Usually, foxes and rabbits are caught.

People say that some eagles catch wolves. Is this the case for you?

There were many beautiful warrior eagles. However, there are no cases of catching wolves.

How do you catch an eagle from nature?

There are many ways. Catching them from their nest when they are little by using trap or catch them from mountains

How many eagle hunters were there in your family?

My father and grandfather were not eagle hunters, but they were fast riders. But my uncles were eagle hunters for seven generations.

Do you teach your children this art?

I have two sons. Both have eagle hobbies. They do their jobs and also catch eagles. I groom and feed the eagles for them.

This is the 20th time you are participating in the Eagles Festival. What was your success?

I won at two Eagle Festival. I won the first place once in Ulaanbaatar and once in Bayan-Ulgii. I have also repeatedly placed in the first, second, and third places.