How Do Mongolians Board Their Foals? 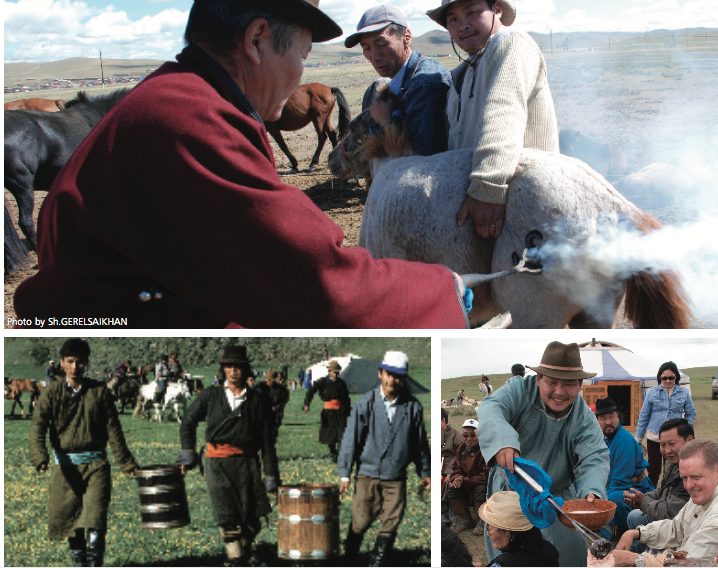 When the weather becomes colder in autumn, the horse-breeders have a custom to set the mares and foals free of their halter and hobbles and to celebrate the feast of “Foal branding”. From ancient times, the feast used to have the name of the “Feast for foal branding”, due to the custom that horse-breeders used to brand the foals right before coiling the tethering line and letting them join their mothers. According to historical documents, since the establishment of the customs “Worship of Chinggis Qahan” in the late thirteenth century, the feast has been renamed to the “Feast for branding foals with tasam (the special “dash” brand) of Chinggis Qahan”.

In order to perform this ceremony, a fire is set in the vicinity of the tethering-line. An iron brand is made red hot. Each foal or colt is then branded, after which the brand is dipped into a pail of fermented mare’s milk. The pail is brought into the ger to be served. Guests are invited to enter the ger. They take their seats around the honored area of the ger to have food and drinks that were prepared for the foal branding ceremony. Prior to starting to enjoy the food and drinks, the head of the family takes a khadag (sacred silk scarf) and offers a benediction poem from the honored individual who had branded the foals and counted the horses. In response, that individual recites a benediction poem related to the custom of foal branding. A mare’s milk-libation is offered to heaven, earth, and mountains. Thereafter, the feast for the “Custom of foal branding” continues according to established rules.

Mongolians have a tradition to catch foals on Tiger Day, at the beginning of summer, and release them on Dog Day, at the end of autumn. In some localities, the ceremony is called the “Feast of Chagt”. While the ceremony has general characteristics to those practiced throughout the nation, there are very distinctive elements that are defined by locality, ethnicity, and weather conditions. For instance, in some localities they do not release tethered foals and colts, thinking that tethered foals and colts in the autumnal frost will become harder. They release them at the beginning of winter or on the 25th day of the last month of autumn. Then they arrange a “Feast of Unhobbling”.