Mongolian Art of Needlework and Knitting

Mongolian art of needlework is one part of the unforgettable cultural heritage of the nomadic pastoralists. Sewing,stitching, embroidery, knitting, and other such arts have developed since prehistoric times. Herders have used a variety of materials to make their needlework creations, including animal hair, which has been scoured, plaited, spun and twisted, silk thread, animal tendons and sinew, and even parts of plants, including the stems and leaves. They also have used a variety of needles throughout history ranging from those created from whittled stone in ancient times to those made from copper, bronze and iron in later periods. 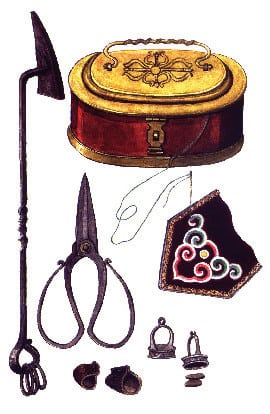 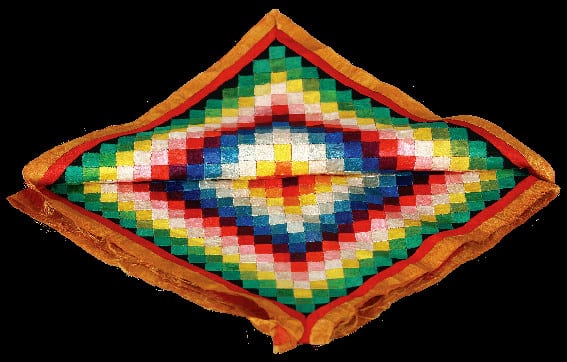 Mongolian art of needlework includes the double-embroidery stitch not only for their national costumes and other clothing items but also for their traditional hand-crafted products. This stitch continues to be used even in contemporary decorative arts. The technique uses two threads and is created both with
and without the use of a needle. Briefly put, the double-embroidery stitch is a meticulous stitching technique made by fastening thread that is coiled around a needle. The stitch requires a great deal of delicacy, patience, and persistence, and at the same time the artistic skills of an artisan. It is done
using the seven colors of the rainbow and requires the embroiderer to use his or her imagination and talent. The distance between each stitch must be equal and the wrapping of the thread must be even as well, whether it is wrapped in a clockwise or counter-clockwise direction. It is important to wrap the thread in the same way and to make a continuous line, especially when blending the colours.
Because of the beauty and strength of the double-embroidery stitch, it is used in the creation of many handicrafts and precious belongings. The finer the thread, the better the quality and beauty of the stitch. One can find many of the Mongolian traditional ornaments, including naiman takhil (eight offerings), doloon erdene (seven gems), natsagdorj (thunder of bolt) and tavan takhil (five offerings), created
using this stitch.

Mongolian art of needlework and knitting Stitch with Untwisted Tread

Zadgai utsan khatgamal or stitch with untwisted thread uses untwisted threads to create unique textile designs. Since this stitch is relatively fragile, it has been used to decorate religious portraits and the costumes of ancient Mongolian aristocrats. 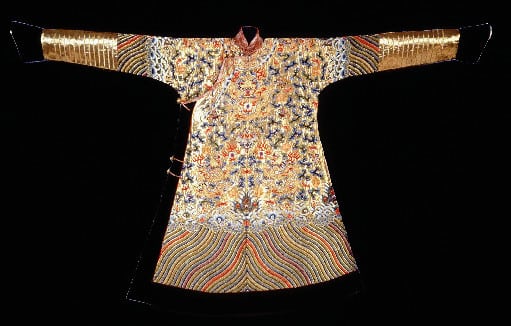 Bitüü khatgamal or satin stitch is a type of embroidery in which two lines of stitches are made that do not touch each other. There are two kinds of satin stitch, the so-called bulge and the flat.
The bulge stitch differs from the flat stitch by having the same density of stitches on both the inner and outer sides of the material. 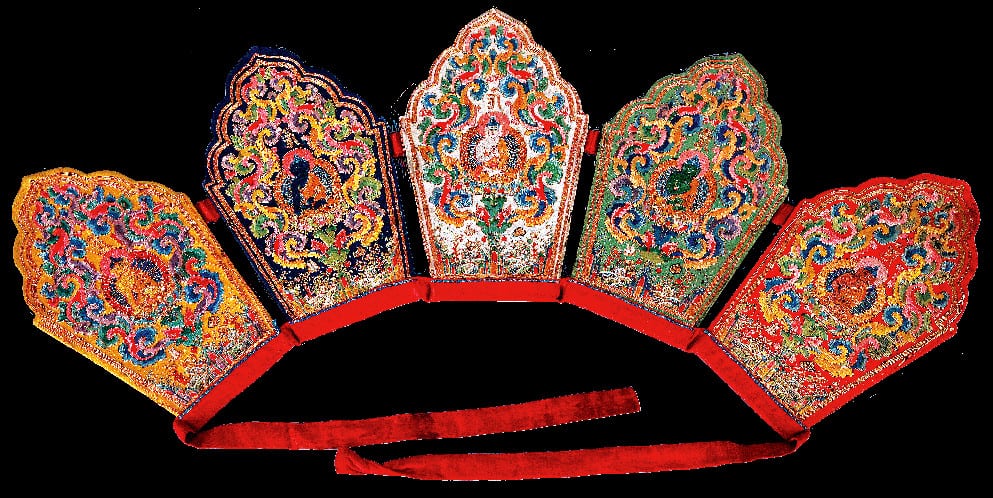 The immense needlework repertory of Mongolian artisans also includes various types of knots. Crafts that include knots include those made from leather, hide, thread, rope and other similar materials. The knots typically have their own names are used in particular types of creations. For instance, a knot called sampin is used on hats and deels as a tip and button, while tsakhildgan süljee, khurgan chikh, gurvaljin zangilgaa, and aman khüzüü knots are used to decorate a variety of household and clothing accessories. The knot called khurgan süljee decorates various tools used by the nomads, including the bridle, halter, saddle, and the braided straps used as a tether and hobble. 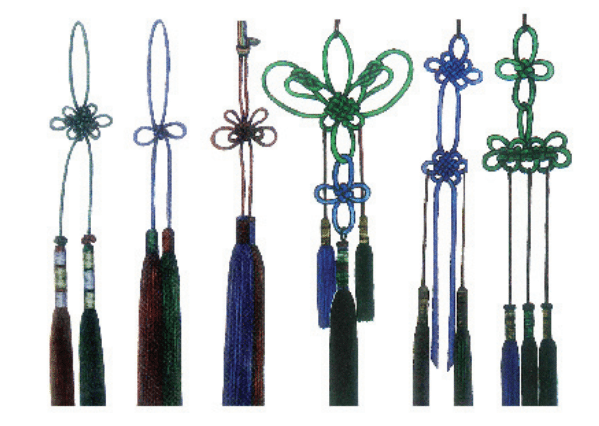 Crochet work embroidery is primarily practiced by women from the ethnic groups of Altaic region. Various items, such as clothing, bed sheets, saddle cushions and accessories used in the home and by nomadic herders are widely found with beautiful and magnificent crotchet work decorations.
The quality of degee züünii khatgamal is often dependent on the proper placement of the threaded needle and the sequences of loops created by the crochet.

This stitch is mainly used for closing shirt collars and pouch purses and on blankets. The dog-toothed stitch comes in two types: the single and the double stitch. A single thread is fastened to the loop when sewing the single dog toothed stitch, whereas two threads are wrapped with one silk thread when sewing the double dog-toothed stitch. When working on the ridges of the material, the stitches starts with short steps and then get progressively longer before shortening again when approaching the starting point.
As a result, equal lines appear on the one side of the ridge, and tooth-like stitches appear on the other side.

Another of the Mongolian knitting and weaving arts is namkh süljikh. From ancient times, Mongolian artisans have created religious and artistic products by bending and shaping a variety of materials, such as wood, hide, and paper, in combination with colorful threads. There are a variety of namkh süljikh styles. One style, for instance, uses special pieces of wood bound together in triangle and rectangle
shapes. 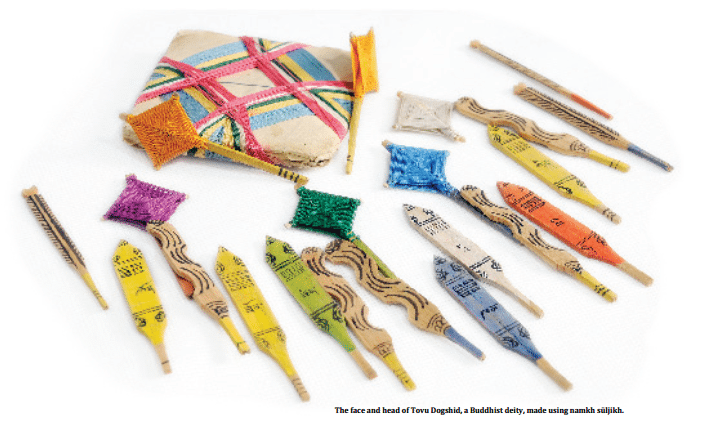 Meshwork is so flexible that numerous patterns and ornaments can be knitted and woven into the material using a variety of colourful threads.

The ribbon stitch is a kind of needlework that uses various kinds of ribbons as threads. It is created by alternating so called plain and purl stitches.

This stitch resembles a herring-bone and mostly decorates the edges and ridges of various accessories. The first stitch starts from the back side of the object and then the thread is passed over the ridge of the object and sewn with even gaps in the same direction. When the distances between the stitches are even and equal, this fish-bone stitch looks very beautiful.

Nomadic Mongolians often tie up their ewes with a knot called khonin kholboo when they milk them in the morning. Khonin kholboo or chain stitch is a continuous and beautiful stitch which resembles the aforementioned knot above. It appears on a felt rug that dates back to the period of the Great Hünnü Empire (third century BC) and is still in use today. 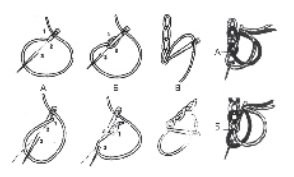 Due to its strength and decorative appearance, khonin kholboo has been used to decorate the collar of deels, the edges of footwear and hats, snuffbox pouches, and other accessories and clothing worn by men.

There are many types of cross stitches, including those that resemble crosses, dashes, and clasps. Anything can be portrayed using the cross-stitch technique, from thematic embroiderie 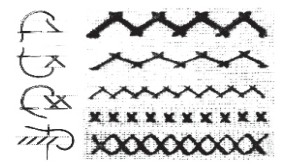 s and portraits to depictions of nature scenes. Obviously, the appearance and fineness of the creation depends on the type of cross-stitch that is used, as well as the density and color blends that are used.

This stitch was mostly used for making clothing accessories that aristocrats and religious figures would have worn in special ceremonial events and rites. Examples of this kind of needlework are exhibited at the Bogd Khaan Museum. They include a dragon patterned cape worn by the Eighth Bogd Khaan, a coral tasseled and pearl patterned skullcap of Queen Dondogdulam, and various cloaks, gowns and sashes worn by Buddhist clergymen. 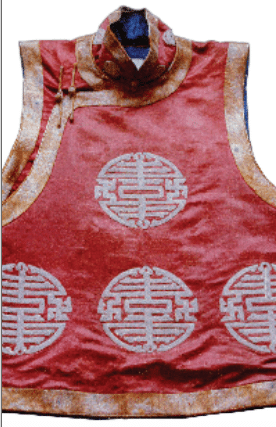 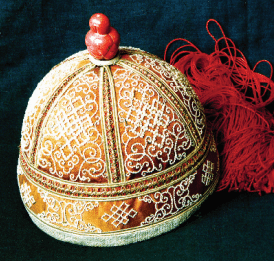 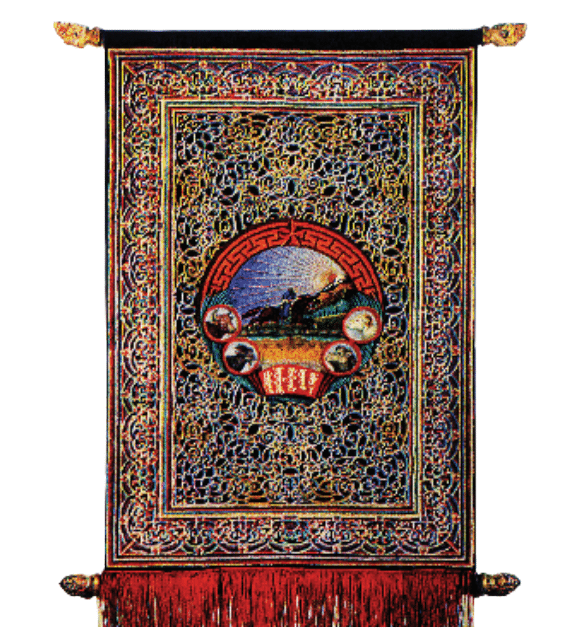 The cannula, or needle with tube, is used for making khöndii züünii khatgamal, which is stitched from left and right sides and fastens the end of a thread. The appearance of the cannula stitch can be different from one creation to another due to the distances and sizes of the stitches used. 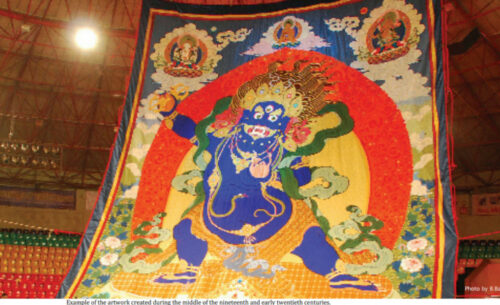 Zeegt naamal or hemmed appliqué is a complex of diverse needlework techniques and is one of the most common types of needlework art in Mongolia. To create hemmed appliqué, one has to prepare two black-and-white versions of the final design. One version is cut out in detail and the other one is painted with different colours, carefully marking the details such as borders, lines and ornaments on the draft. Then, various silks and textiles are prepared according to the size, colour and other features of the pattern draft and starch is applied to each part. The cut-out draft is pasted with folded edges on this material, employing careful attention and meticulous hands. If the silk fibers are not pasted in the same direction, the creation will look variegated. After starching, the silk and other textiles have to be flattened and then the pattern is pasted together. The edges are trimmed with a ribbon-like stitch called zeeg or hem-stitch. Zeeg must be made of three silk threads. Since the zeeg is the hem of the pasted materials, it has to be brighter than the background silk in order to distinguish it. There are different kinds of hem stitches in Mongolia. For example, people from the Gobi region have an ancient tradition of pasting silk and other materials without a hem, distinguishing the background with a clear border. Our Fine Arts Museum has a rich stock of traditional hemmed appliqués, starting from small hemmed appliqués of thirty five Buddha of Dünshig. A variety of items, from simple daily-use accessories to immense Buddhist deities, have been made of appliqué in Mongolia for centuries.
Appliqué is created according to the Mongolian way of painting, which decorates ornamental lines of items such as flowers, plants, rocks, trees, ribbons with golden outline called khai. Also, some special ornaments can be decorated with outlines of small pearl beads. The pieces with hemming are laid out on the model according to their type and pasted carefully. Then their ridges are pasted on the real background with meticulous and nearly- invisible stitches of fine thread. When the cut-out figures are used as a pattern and pasted on the back of the silk and folded down, they become glued paper layers or tsavagtai naamal. As it becomes hard, the glued paper layers make it easy to apply the appliqué. Also, it is common for small appliqués to be kept in frames and lockets. However, because these art forms become easily wrinkled when folded or bent, it is not good for large-sized creations. Appliqué art reached its zenith from the middle of the nineteenth century to the beginning of twentieth century, as a number of renowned artists such as Tsend from Toisümlin aimag, Khasgombo Zoogoin, and Jamyan were greatly applauded and appreciated with their artistic talent and their creations. Although many appliqué artworks were destroyed during the Great Repression of the 1930s, this art has survived and has been re-created by prominent artisans and artists from different generations, such as U.Yadamsüren, Ya.Lunya,
Magsarmaa, B.Tsermaa, B.Norolkhoo, and A.Tserenkhüü. 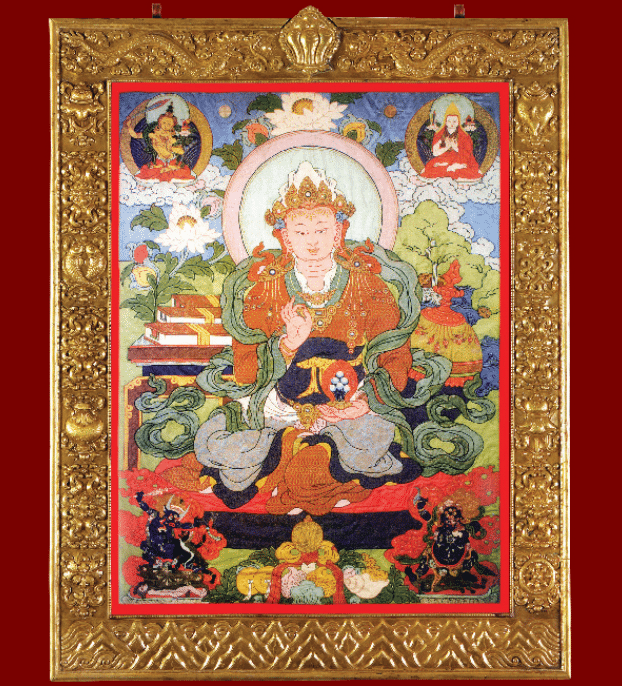 Mongolian artisans have ancient crafts of ribbon-making such as zoos shiree (circled stitching), khosh (parallel bands), and gyarag bus (weaved sash). All are, however, rarely practiced nowadays. A field research group, studying Mongolian folklore, first discovered ribbon-making in 1982, along with khosh nekhekh-making in Ömnögovi aimag in 1986 an 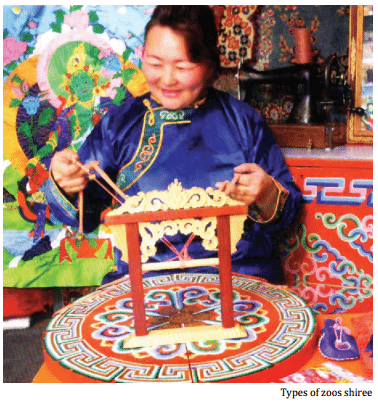 d gyarag bus-making in Dundgovi aimag in 1987,
and brought them to the attention of the public. Consequently, several artisans have since taken up work on zoos shiree knitting, including D.Batbuyan and S.Khandmaa. Wood engraving artists have also come to specialize in zoos shiree making, such as B.Bayarsaikhan. Zoos shiree knitting is done in a number of different ways, using threads (from 3 to 12, 24, and 32 threads at a time) and pieces of ribbon and rope (in groups of 1, 2, and 3). Nomadic artisans create such traditional patterns as khavtgai khee, ölziishüü khee, khanan khee, and tagnai khee. 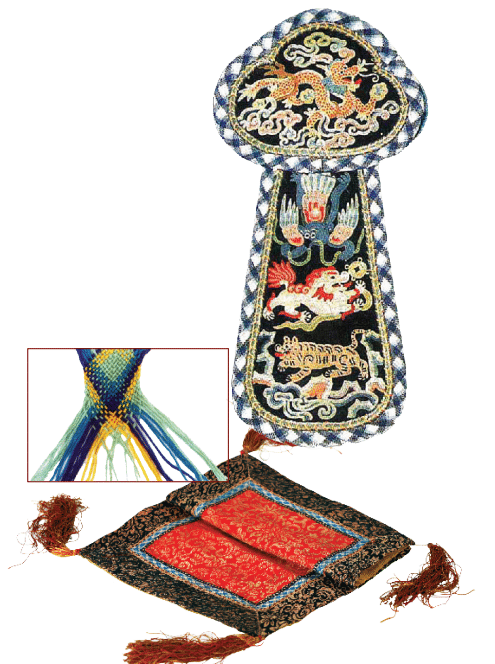