How Mongolian People Make Felt Throughout the Centuries 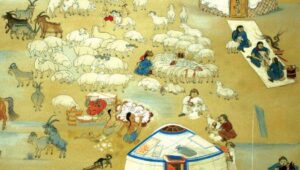 Mongolians have a long standing tradition of manually processing the wool and hair of the five kinds of animals for use in their daily life. At the end of spring and the beginning of summer, the animals have grown fat on the fresh green grass and start to shed their coat. The manes of horses are cut; the coat of cattle is combed; the beard of camels is clipped; the wool of sheep is sheared; and the down of goats is carded. The hair from these animals is processed continually throughout the summer and autumn. There is a tradition to process these in cooperation with relatives and people in the vicinity. They gather and work at each other’s homes in alternation.

In the summer, the first shearing of wool can be undertaken without the differences of age and sex of the sheep. But in autumn, the shearing the wool of the ewe sheep cannot be taken in order to keep these animals safer in winter. This is traditional.

Preparations for the shearing are done at the end of spring. The sheep shearing day is announced to the people in the vicinity. Relatives or neighbours in the vicinity come with shears and strips to bind the legs of the sheep to assist in the shearing. If the chosen day is rainy or stormy, they clip only a piece of wool. After this, they can shear their sheep the next time the opportunity presents itself. Before the arrival of assistants, the head of the family starts shearing sheep. When one of the neighbors arrives to assist, he says:

May the shears be sharp

May the fleece be fluffy or

May the shears be sharp

May the sheared sheep

Be tens or hundreds of thousands

May the dust from these sheep

Rise up to the sky

As a response, the head of family gratefully replies:

May you be as prosperous as you wish

Commensurate with your desire

The custom of preparing fleece-wool in the autumn is the same as with the first shearing. 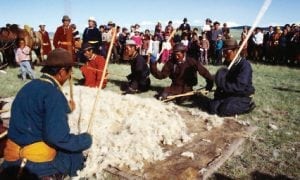 The sayings of those who beat fleece with swipples, or special sticks, are similar to those that accompany the shearing of sheep. Before the chosen day to beat the fleece, its lanolin and moisture are dried by stretching it out. The host family prepares swipples for everybody who is going to participate, as well as the mattress and buff for making rings to beat fleece. The host family treats those who come to assist in beating fleece with tea and other foods. Mostly women each take two swipples and sit in a circle around the fleece and look at each other’s face. Men place an amount of fleece on the ring depending on the size of ring and stretch it. The head of family or eldest man in the group clad in hat holds a cup of milk or bowl of fermented mare’s milk, looks to the south, and chants a benediction:

As big as a world

As big as a mountain;

The fleece of the lambs Is as thick as a finger

Is as thick as a span;

Be rainless And windless;

May the fleece be beaten with our swipples

Separating the good and the bad

And preparing it as we wish

The man finishes his benediction and sprinkles milk from his cup over the wool as a blessing. He then sets the cup of milk or bowl of fermented mare’s milk aside and begins to beat the fleece and others follow his example. If others come while the fleece is being beaten, they say:

Be fast without a whirl of dust

And as strong as sinew

Or May your woolens

In response to these words, which symbolize a successful production of felt, we say:

This place is graced with your virtue

And your gracious benediction

Commensurate with your desire

May you be as prosperous as you wish

The beating of the fleece can continue depending upon the amount of fleece and the endurance of the people gathered. When the beating is completed, the host family treats those who assisted with fermented mare’s milk and dairy products. Then another household can beat its fleece with the assistance of neighbour households. Traditionally they alternate in these ways. The origin of this custom is very old.

After those at one household complete the beating of the fleece, the families move to a space with well grown grass and plenty of water to prepare for the making of the felt. Felt making is usually practiced at the end of summer and the beginning of the first month of autumn. Each family announces the day to make the felt to their neighbours, relatives and friends in their vicinity. The families in turn manage their work and prepare to assist in the making of felt. If needed, the other families bring animals to assist in rolling the wool (usually stallions are used for felt making, but in the Gobi region camels are used and in northern regions oxen are used as well).

The family who is going to make felt can prepare fermented mare’s milk and other dairy products, and butcher a sheep for those who are going to help. This butchering is called ‘shigus’. The family lays out sample-felt on which the beaten wools are lain down. This sample must be clean and good felt which was made in the previous year. If it is not clean or if it is worn-out felt, the family will bring the sample from the respected family.

In the morning of the chosen day those are to make felt gather from various directions. They are treated with dairy products. Then they start laying out the woolens on the sample felt. Men, girls and boys bring woolens near and go to fetch water. The lady of the household, the eldest or most honourable lady starts laying out new woolens as an example and then other women follow in turn. It demands great care to adjust the thickness and thinness of the wool. If the head of the family has no experience, he can invite an expert in making felt. The expert can direct all kinds of felt making. The first layer of lain woolens is evenly sprinkled with water. The second layer is put on the first. This layer is evenly sprinkled with water. The final layer (zulkhai) should be from a fleece-wool or lamb’s-wool. After the third layer, men wind a wooden pole with irises and other grass as insulation between the pole and woolens. The layers of wool are wrapped around the pole. This roll of wool is then covered with soaked hide and tightly bound together with rope. As the rope is tightened the herders say “numbai tumbai” (both are closed). Water is then poured over the entire roll. Those gathered say a benediction words: May the swan-white felt be without any cracks Or chinks here and there;

May the felt be whiter than fresh snow

And harder than bone;

And smoother than the surface of ice

And more valuable than silver;

May the felt be without holes

And durable without wear;

May the felt be as white as a conch shell

These recitations inspire those who participated to make the good felt.

Two men attach parallel ropes to the two rings of horn through which the two ends of the wooden pole pass. Each end of the rope is tied with a firm knot and then placed under the stirrups of each man on horse-back. Before their pulling the roll they say:

May the felt for public consumption be of a good quality

May the human body be in good health

May the felt be stronger than bone

And whiter than fresh snow

They drop milk or fermented mare’s milk on the roller. They then start pulling the roller slowly, gradually speeding up the pulling. If possible, they reach a gallop. Mostly young men ride the horses drawing the roller. As the first roller is pulled, the second is prepared for pulling. Several felts can be made in a day. If the distance of pulling the roller reaches 15-20 kilometers we stop drawing, unbind the roller and drop milk on the roller and on the polls of the two horses and on their croups as a blessing. The first felt is an expression of common efforts. On this occasion we traditionally say a benediction. Before reciting the benediction, a tankard of tea and plate of dairy products are brought and then the first felt is blessed with milk. It says:

The fleece of tegs

Is lain with span-thick wool

The fleece of lambs

Are lain with finger-thick hair

White fleece with lanolin of a hundred thousand sheep

Are lain and spliced

Every layer of woolens

Are sprinkled with hundreds of streams

And drawn with the force of geldings

And rolled again and again

May this be a durable thing

As it is called felt

In such a manner, labour is eulogized poetically. After reciting the benediction, men only can stretch new felt when moistened. The new felt is folded. We jerk the folded felt on which a boy or girl sits. It is called esgii jishikh and its quality is tested. After completing felt-making, there is a small feast (the feast of mutton or the feast of dairy products). The felt makers are hosted by the family who made the felt.

Every attendant can receive his or her own share from the products. These products are distributed among the attendants. The two men who drew the roller can take confections and dairy products. The expert of felt making can take one from new felts which he likes if the family has made many felts. If the family made few new felts, he may take the previous year’s felt or a sheep as a reward. This is called zakh ögökh (to give a reward). If the family borrows the sample felt, it is given back with a piece of mutton, plate of dairy product, or piece of confection.

After a few days, after the felt becomes dry, the new felt is cut into shapes that can be used as roof-covers, wallcovers, crown-covers, door-covers and as felt rugs. They are laced and stitched. This is called as ger covering.

The women who are adept at sewing can bring scissors, needles, thimbles and camel wool threads, and help with sewing the felt, but this can only be done on an auspicious day. After the completion of the work, the host family treats everyone who participated with dairy products and gives them felt for stockings, cushions, sweat-cloths, or mattresses as a gift. Mongolians process the wool and hair of animals in this manner and make felt and various felt articles.