Let’s take a common example of these spells and incantations:

I’ll give you some grilled goat’s meat.

I’ll give you some grilled goat’s meat.

With golden molars closes its mouth.

The meteor falls from the sky,  But my star is still up. Pooh, pooh.

This is a genuine example of the incantation and spell. There are incantations and spells for people whose teeth and organs of locomotion are full. For instance, a person, whose. 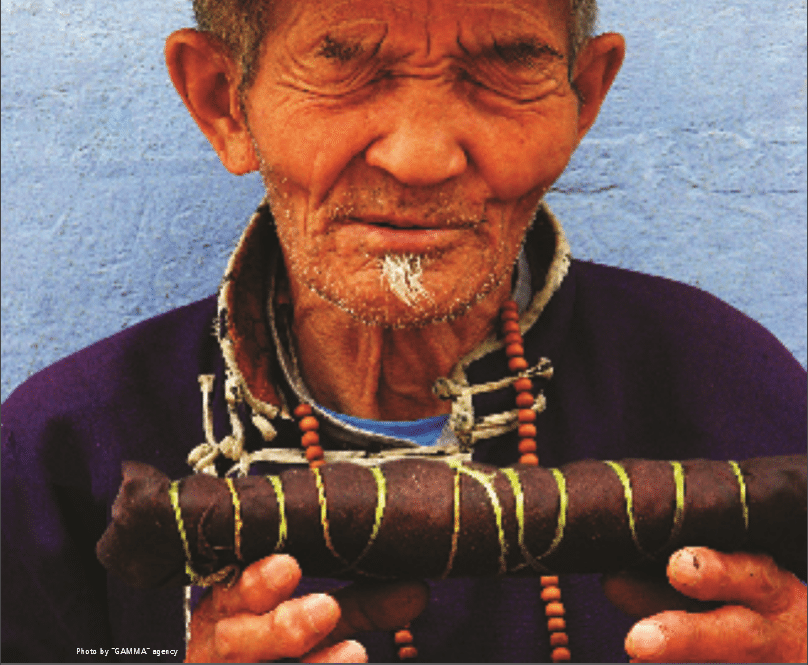 teeth are full can enchant this particular spell. If that person’s teeth fall out, he or she passes the duty to another person whose teeth are strong.

• There is a spell for a person with extra fingers. When a boy or girl’s fingertips are swollen, a person with six fingers pretends to cut the air with a pair of scissors and recites the spell, “I cut you off, I cut you off!,” saying it seven times.

• There is a spell to put an emphasis on one’s kin. This is recited only by the maternal or paternal uncle. When a child suffers from thrush, Mongolians place a bridle with the straps sticking through the space between the base of the roof felt and the frame of the ger door. The strap is then placed in the mouth of the suffering child and an incantation made.

I am descended from the great haan.

I am descended from the great haan.

I am of the jasper button rank.

I am descended from Blue Heaven.

But the Uriankhai chonod (chonnut) tribe incants the following when people are frightened by thunder:
Strike a mountain with lightning if you need the tallest,

Strike the steppe with lighting if you need widest,

Strike me with lightning if you need one who is alone.

Strike me to pieces with lightning if I eat spleen.

Strike me to pieces with lightning if I eat omasum. There were many secret spells which were very difficult to learn because of the tests that took place while they were learned.

Words of Libation and Anointment

Mongolian oral literature refers to our customs and habits. Remarkable examples of this include the words of libation and anointment. The libation is the offering of the first drops of milk or of any diary product to heaven, spirits of shamans, souls of progenitors, or mountain and water spirits, according to the established tradition and custom. The words of libation and anointment is classified into two forms defined by their own nature. The poetic words of libation is said when Mongolians venerate father heaven and mother earth. They make milk libations to them in such a manner. The milk libation is made on a chosen day that is auspicious to the powerful heaven.

Both are the best Twinkling stars.

It is accustomed that the large group of horse-riders headed by the nine white horse-riders to around the gers, tethering-lines and livestock animals three times in a clockwise direction and make milk libations.

The Mongolian oral literature has propitious omens, and below are some examples of ones that Mongolians often say. Propitious omens are not empty promises. If they were, this would be a bad omen. The words of propitious omens (kind wishes) may be formed by propitious thinking. They have similar meanings and contents to well-wishes. But the words of propitious omens typically are shorter and different from the aims of well-wishes. The words of propitious omens can be employed as part of routine work. They are terse and clear. But the words of well-wishes can be recited at festivals and rituals, like weddings. A person who is well skilled in this kind of formal ceremony and way of reciting can perform it. This person can be called a minstrel in English. He recites the word of well-wishing at the request of the audience and while holding an honourable scarf and a silver cup full of boiled milk or a bowl of fermented mare’s milk. The benediction begins with a denouement and ends with other epithets. It is long and can be recited with a melodic formula. But the words of kind-wishes, in contrast, have no long structure. Nor are they recited with a melody. However, those words are poetic. The words of kind-wishing are related to the nomadic herder’s routine work in content and it is constantly repeated.

• If we encounter a person writing, we say:

May your brush sweep the paper! 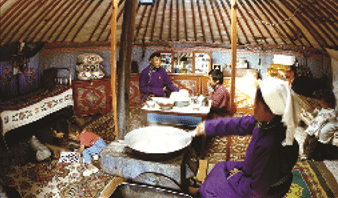 May your chubby babe nine lives!

May your bleating sheep grow into the thousands

• When we enter a ger where a family is churning fermented mare’s milk, we say: May the ghee be produced.

• When somebody is erecting a ger, we say: May the ger be in a nice shape.

• If we encounter a person doing needle-work, we say: May your sewing be fancy

When we enter a ger where milk vodka is being distilled, we say: May the milk vodka be strong,The fermented milk be effervescent ,The cottage cheese be thick,

Your vodka be ambrosial, and Your wife be a god-mother!

When we enter a ger where a family making tea, we say May your boiled tea be sweet and My the family I am visiting be well-off!

When someone is milking a cow, we say:

May the milk fill the brim of the pail!

May your plan be accomplished!

Well-wishing often incorporates the quality of the materials being made and the skills of maker:

Be a master of thousands of animals and large vessels.

Your funds be inexhaustible,  and

Your happiness be consummated

As you wish it 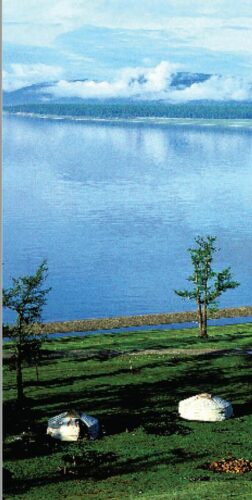 The Mongolian triad refers to the Mongolian traditional preference for and symbolism surrounding the number three. This triad is expressed in oral literature in ways that are very unique to Mongolia. The cosmos is often portrayed as existing in three parts: the upper, middle and lower realms or organic and inorganic life.

In the three levels of the universe,

The sky is the level of pillars (the upper realm),

The mountain is the level of the girdle (the middle realm), and

The ocean is the level of the lid (the spiritual realm).

In the three rich realms of the universe,

The sky is rich in stars (upper realm),

The earth is rich in roots (middle realm), and

The ocean is rich in water (nymphic realm).

In the three beauties of the universe,

The flowers are lovely (organic universe), and

The maxims of one’s parents are lovely (human universe).

In the three sacredness of the universe,

The growing juniper is sacred,

The burning incense is sacred, and

The flowing water is sacred.

In the three swiftness of the universe,

The clouds of the windy sky is swift,

The thinking of a witty person is swift, and

The gait of a good horse is swift.

In the three provenances of the universe,

Tea is the provenance of food,

The khadag scarf is the provenance of material, and

Fish is the provenance of animals.

Proverbs and aphorisms are very similar to idiomatic ex reflect ancient history, the thinking of remarkable people, pressions. They are picturesque descriptions of reality. They religions and ethics, and the realities of modern social life. are products of many witty people and have been tested by the nomadic ways of life. They are the results of philosophical speculations, and are typically terse and very pointed. They speak about the universal cycles of time.

Time is apt to change.

The iris is apt to discolour.

The green of the grass is apt to turn to yellow.

“Experience is the mother of wisdom”

But if you lose a horse, you can catch it again;

A feast has a steward,

A contest has a winner.

A good horse depends upon its foal-time.

Boots are heavy for an exhausted man.

Do not look the bed sheet of an elder sister-in-law.

A riddle is a genre of oral literature that represents social and psychological phenomena of the human imagination and that is solved through puzzling questions.

Brass that does not exist here,

Brass that has no owner,

Brass that is a span in size,

Brass that is round. What is this? (the sun)

This riddle describes solar illumination and demands knowledge of measurements, like the span. A riddle is a test of intelligence and thinking capacity.

It is possible to unfurl and furl this like

cervical vertebrae. What is this?

A statuette on a running table. What

is this? A man on horseback

The upper part is exactly yellow,

The middle part is swan white,

The lower part is rather grey. What is this?

It is smaller than you, but it can lift you. What is this? (Stirrup)

They have the characteristics of yearling colts. What is this?

The trunk is full of curly-budges

Sandal cups vie with each other on the road. What is this? (Hoofs)