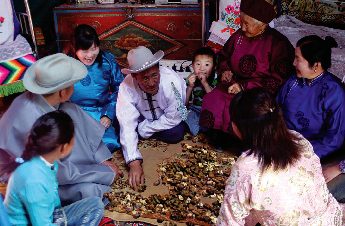 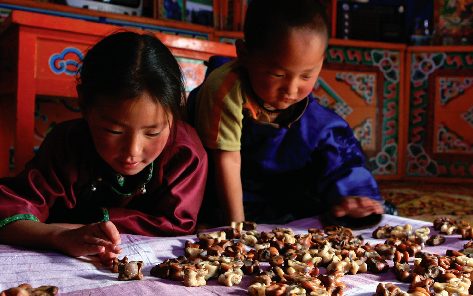 If the game is played on the first day of Lunar New Year, there should be a special part next to the head that 4 red anklebones are laid as a round, and tale is represented by 3 black anklebones. Also, on the left side, 5 blue anklebones are laid as an end of bow and arrow, and called as ‘the Tree’. In the right side of the Tree, 3 white anklebones are placed imitating the point of the arrow and called “the Iron”. Then 4 anklebones are placed on the four paws of the turtle, representing Dust, Air, Mountain and Wind. Therefore, the Multicoloured Turtle game is played with 108 anklebones during the Lunar New Year. The person who has the same year with the coming New Year has a priority to start the game. If there is
no same year person, compatible year person with coming to New Year can start and the next players succeed according to clockwise.Players cast dice and if there is 1-spot, it is available to take one of the Dust, Air, Mountain, and Wind. If 3 is indicated, it allows the players to get the Fire or 4 legs. Then 5 allows taking the Tree. If the anklebones with a same number of the dice are taken already, a player starts taking from the main body of the Turtle. For instance, bladder or heart is taken by 1, ears, eyes and kidneys are taken by 2, the head is taken by 3, shanks are taken by 4, paws are taken by 5, neck or back parts are taken by 6 respectively. When all available numbers of anklebones are finished, the player gives back the same number of anklebones according to the number that dice indicates. The game continues in this way, and the person who collected the most number of the anklebones wins. The winner is considered to be the luckiest one in the coming year. 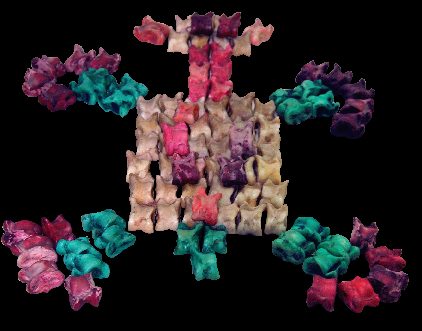 Several people can play this game. When playing this game, some anklebones should be placed in a row, making a line and each player assigns one anklebone as their racing horse and places them at the start point of the line. Players toss up 4 anklebones and make their horses move forward according to the number of horses indicated. If there is no horse, there is no move. Then the player who reaches first to the finish point of the line wins. If the players want to continue the game, they can restart the race from the other side. 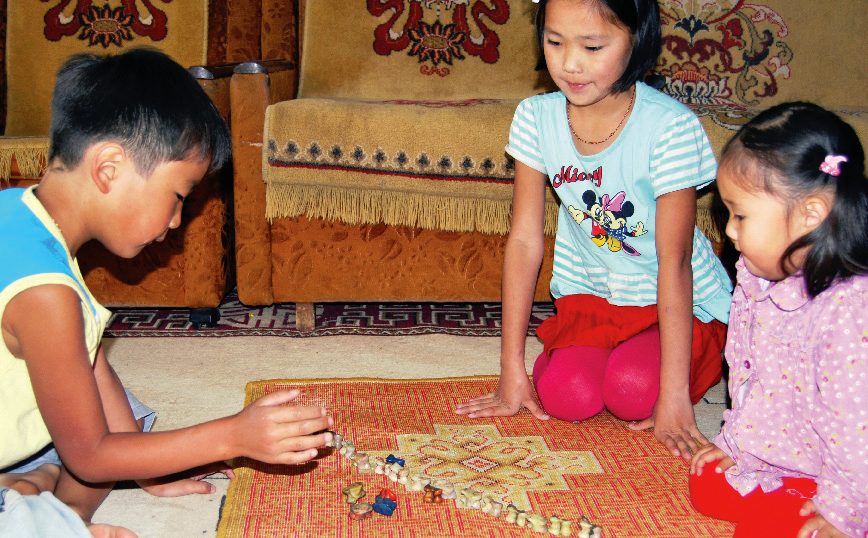 Ankle Bone Shooting is one of the ancient and popular games among Mongolians. There are a variety of types of this game such as shooting anklebones from the ankle area of a leg with a sole, shooting from the knee with a bone tool called godil, shooting with a short, smooth piece of wood, known as khashlaga and gun shooting which elders mostly 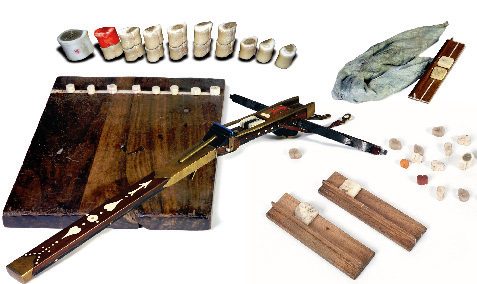 practice and so on.

Shooting with a Counter

This shooting game consists of khashlaga (left edge-walled flattish shooting board made of Chinese pine) and sum (trapezium shaped counter made of antler). And targets made of the sawed prongs of antler.The targets are arranged in a row and double-laid in front of the crease-line. The middle of the double-laid three targets is called “dombo”. There are single-laid three pieces from the middle targets on the right and left sides. They are called “gichir”. There are seven targets to be taken off if the shooter hits the target. They are called “Gazriin khasaa”. 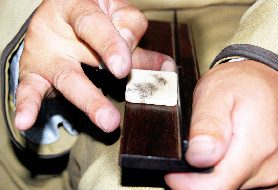 There is a measuring stick. It is used to measure the distance of shooting. Adults can shoot at a distance of nine feet (4m and 72cm) and a child can shoot at a distance of seven feet (3 m and 67cm). There is a shooter from each playing team. The player can shoot four times in a turn. The other players sit in a row along both sides of the crease-line and “cheer”. They restore the targets and collect counters. The player places the shooting board with the counter on his or her left knee firmly and shoots with the middle finger of the right hand. The winners will chip off all of the targets. If they draw, they wager money, which is called “Düüjin kharvakh”. This play is expanding from year to year. There is a nationwide match every year that has become a part of the national traditional festival of Mongolia.

If you want to buy Anklebone Shagai