The Fall of the Dzungar Khanate

Mongulai
May 3, 2019 History of the Mongols, Mongols Surrender to the Qing 0 Comment

Although the Javzandamba and the Emperor claimed that Halh had become a Chinese vassal, Galdan Boshgot’s Mongolia, with its capital on the Herlen River in Halh, remained free and independent. In order to defend his nation of the United Halh and Oirad, Galdan Khan needed the strength to withstand the imminent onslaught of the Manchu. He was getting ready and so was Kangxi. In 1679 the Emperor undertook his third campaign against Galdan, charging with all his forces divided into three parts.

On May 13, 1696, the Qing army inflicted a mortal blow to Galdan Boshgot in a battle that took place at Zuunmod in Terelj. Thirty thousand of Galdan’s men fought fifty thousand of Kangxi’s. Fighting for Kangxi’s were Halh Khans who had previously been beaten by Galdan. Mongols killed Mongols with the help of foreign forces, for the purpose of turning their country over to an alien nation. Galdan’s casualties included his wife and 5,000 men, and another 3,000 were taken, prisoner. Galdan himself fled west. Stopping at the Taihar Chuluu in the valley of the Tamir River for a short rest, he found that his entire forces numbered a mere 5,000. This man, the last one to unite Mongolia, was never to restore his strength.

Experienced in using the internective strife of the Mongols for his own benefit and seeking to cut the ground from under Galdan, the Emperor became a generous protector of Tseveenravdan, a contender for the Oirad throne.

Emperor Kangxi dispatched a mere 10,000 troops on a campaign to finish off the Oirad Kagn. Loath to be captured alive, Galdan poisoned himself on March 13, 1967.

On the death of galdan Khan in 1745 the Mongols came under yet another acute attack of their chronic aliment, an agonizing addiction to wasting themselves by destructive internecine warfare. Had they consolidated by internal unity and stability the powerful state created by Galdan Boshgot, and his successors TSereenravdan and Galdantseren, the Mongols would not have become easy prey for either Russia or China. After he had defeated the Chinese near Kobdo (present-day Hovd) Galdantseren began thinking about reclaiming Halh and Hoh Nuur from the Qing. Qianlong (1736-95), or the Tengeriin Tsetsgen Emperor, who succeed Yongzheng as emperor of the Manchu upon Yongzheng’s death in 1736, was apprehensive of the Dzungar Khanate. Therefore he made a friendship pact with the Dzungar, which, among other things, defined the Sino-Dzungar border.

At this time the Mongols, having split into rival groups, were waging a mortal fight over the vacant royal throne. Tseveendoinamjil, the fifteen-year-old son of the late Galdantseren, was installed, but because of his age, his sister Ulambayar assumed power. A few years later the young khan had his sister jailed and many other people executed on the charges of conspiracy. That point, Lhamdaijaa, Galdantseren’s son by a concubine, killed the Khan and usurped the throne. Galdantseren’s younger brother Davaach, in company with his friend Amarsanaa of the Hoid, topped Lhamdaijaa. Just as another of Galdantseren’s sons was to be enthroned, Lhamdaijaa killed him. Davaach and Amarsanaa took temporary refuge with the Kazakhs. When they returned, Amarsanaa, having killed Lhamdaijaa, installed Davaach as Khan. Nemehjargal, Khan of the Dorvod, then attack at Nemenhjargal and killed him, only to start quarreling between themselves.

After Davaach sent three fruitless expeditions after Amarsanaa, the Khan himself led thirty thousand troops and at last defeated his former companion. Amarsanaa fled to China and offered to join the Manchu ranks. The Qing Emperor welcomed this with great pomp and bestowed on him the title of Hoshoi Chin Van, and gave him lands between the Orhon and Tamir Rivers. The Chinese ruler now had one more man who was prepared to fight Davaach to death. 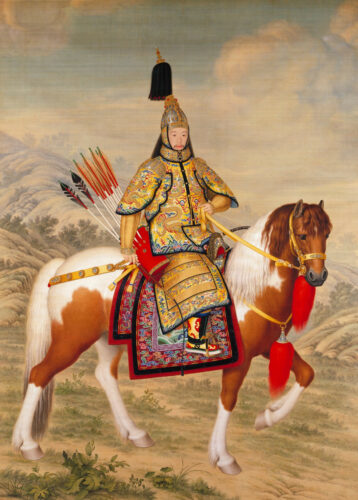 Seeing their enemy’s weakness, the Qing dynasty moved its 50,000-strong army against the Dzungar Khanate in 1755. Most of these troops were Mongols themselves, from the Halh, Alasha, Tsahar, and Barga. In accordance with the emperor’s plans, the army was divided into three groups which took different routes. One of these was led by Amarsanaa. To take this country, dislocated and disorganized as it was, was child’s play. Davaach, who had been able to marshal 30,000 troops in order to deal with his friend Amarsanaa, had only 7,000 at the time of the Chinese invasion. The Qing troops easily defeated him. Davaach fled but was soon hunted down and captured by his enemies. Thus the hundred-and-thirty-year-long endeavor of the Manchu to conquer Mongolia came to its successful end.