Mongulai
Apr 17, 2020 History of the Mongols, Mongolia During the War 0 Comment

On April 27, Japan’s Cabinet addressed the issue of China and South Asia. The Japanese Cabinet sent urgent instructions to the Kwantung Army in Japanese Manchuria. The instructions called for strengthening the Manchuguo-Soviet and Manchuguo-Mongolian borders and establishing firm military bases in Manchuguo, Inner Mongolia, Northern, and Central China. They also mandated a display of the goodwill by the Empire, through political, economic, and cultural cooperation on the basis of Asian solidarity and by employing diplomatic means rather than military pressure.

Means to Settle a Dispute, and the First Battle

Tokyo gave in to the pressure in September 1939 by allowing the Kwantung Army to “make autonomous decisions on military, economic, and political issues, and uniform headquarters regarding each decision”. In fact, this was merely a formalization of the defacto autonomy which the Kwantung Army showed in the battle of Halhyn Gol or, as the Japanese call it, the Nomun Khan Incident, a large scale border clash between Mongolia and Manchuria in the summer of 1939.

The Kwantung Army leaders made this disputed border territory between Mongolia and Manchukuo the location of the military conflict. Ever since the establishment of Manchukuo, this border region had been the site of several small-scale border incidents that remained unresolved in spite of trilateral negotiations between Manchukuo, Japan, and the MPR.

On May 11, 1939, the Japanese troops seized Mongolian territory up to the left bank of Halhyn Gol. Approximately ten thousand Japanese troops were involved, which shows the large scale of the operation. According to Japan and Manchukuo, the Manchukuo-Mongolian border was to run along the river. Mongolian and Soviet troops were immediately dispatched to the region for a counter-offensive, which pushed the Japanese back to the old border on May 29.

The two sides then began preparations for a major battle. The Japanese brought in their reserves, increasing the number of their troops to thirty thousand. Moscow hastily assigned Zhukov, a general who would become the Soviet Commander during World War II, to Mongolia. He arrived in Tamsagbulag on June 5, 1939. Zhukov concluded that the seventeenth corps deployed in Mongolia was insufficient to win the next battle. So he brought the Ninth Motorized Armored Tank Brigade, the 150-tank Eleventh brigade, the 154-tank Seventh Motorized Armored Brigade, and the twenty-fourth artillery regiment into the area around Halhyn Gol. The Soviet Mongolian joint forces were also represented by the Eighth Cavalry Division of the Mongolian Army, backed by a 45mm artillery unit. Such was the force of the two sides by the time fighting resumed in July 1939.

At the beginning of July, the Japanese were crushed at Bayantsagaan and had to retreat. The two sides began preparations for a third battle. The Japanese brought in two field regiments and one brigade and several regiments of the Manchukuo Army. Their Air Force was increased and the artillery was refreshed with new supplies from Port Arthur. As a result, their force included 76,000 troops, 304 field guns, 500 cannons, 182 tanks, and 300 aircraft-far more than necessary for a border incident.

The Soviets mobilized even more military force than the Japanese, pulling in from the USSR two divisions, a tank regiment, an air attack regiment, and an atrillery regiment. This gave them one and a half times as many troops as the Japanese, 1.7 times the number of field guns, twice as many tanks, and 1.6 times as many aircraft. The number of the Soviets aircraft was increased to 515. In fact, the scale of preparations turned the military incident into an actual war, and on August 20, the Soviet Army began a sudden offensive across seventy kilometers of the front, encircling the Japanese and destroying them in seven days.

In the course of three battles, 18,100 Japanese soldiers were killed and 48,600 wounded. The number of Soviet soldiers killed stood at 8,900 with 15,900 wounded. The military activities were contained within the disputed border area and were thus conducted in a “gentlemanly” manner. in other words, the subject of the dispute determined the geography of the battlefield.

In spite of three defeats, the Japanese did not give up, and on September 12 they attacked Nomrog River and occupied its left bank. When the preparations were underway to offset the Japanese, a cable arrived from Moscow ordering a stop to the military activities and a hold on he border positions of September 15. Soviet-Japanese talks had started in Moscow.

This was how, as the result of the Battle of Halhyn Gol and because of the USSR and Japan, Mongolia lost the left bank of Nomrog River and Mana Mountain to China without any further reconsideration of the issue in Manchukuo-Mongolia relations, and the Nomun Khan Incident did not include this area. No further military actions should have taken place, but even after the talks started in Moscow, the Japanese launched an attack on September 12 “breaking the informal rules of the game” as Brigadier Bogdanov described their action in his report to Molotov.

The Mongolian casualties amounted to 237, less than one percent of the number who had perished in the purge. The Mongols had mobilized their force to meet the Japanese aggression. But in a battle of the two great powers equipped with the latest military technology, the Eighth Mongolian cavalry division made a minuscule contribution. It was clear that horses and sabers were helpless against modern tanks, aircraft, and canons. But the Japanese mobilized a twelve thousand strong barge cavalry regiment to fight the Mongolian cavalry. 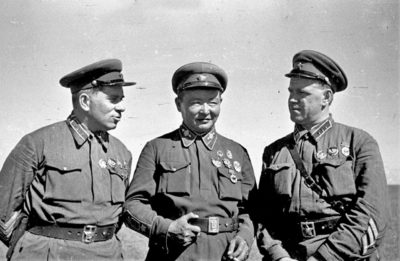 The Soviet’s reasons for Conflict

1.  To continue the Sine-Japanese war. The Soviets, by exploiting the Sino-Japanese war, would demonstrate their weight as an ally to Chiang Kaishek by confronting the Japanese.

2 .The confrontation was taking place on the territory of a third party, so there was no danger of its spilling over and turning into a Soviet-Japanese war. through Sorge, their spy in Tokyo, the Soviets knew that the Japanese Chiefs of Staff were not interested in increased military activities.

3. The defeat of the Japanese at the halhyn Gol would encourage movement southwards, and would shift the attention of japan’s military toward the USA and Britain.

4. Having been shamefully defeated in this region in 1904. several generations of Russians harbored a desire for revenge.

5. The confrontation would give the Soviets a chance to improve their image among the Mongols. The Japanese attack lent credence to accusations of Japanese espionage, and Soviet military assistance would show the Mongols that they had chosen the right ally and friend.

1. The border dispute had to be resolved. The 1907 Russo-Japanese secret treaty, still considered valid, did not include any specific provisions regarding this area.

2. To show their strength to the Soviets. The Japanese intended to force the Soviets into decreasing their assistance to China if not stopping it altogether. They also hoped to teach a lesson to the warning Chinese.

3. To test the Soviet army. The Kwantung Army generals were confident that they could dominate a medium-scale confrontation with the Red Army regiments and battalions led by yesterday’s low-ranking uneducated officers.

4. To rebuild their reputation and cleanse themselves of the shame of their defeat in August 1938 in a skirmish with Russia at Lake Khasan.

5. A large-scale military conflict would be an important opportunity to display Japan’s military prowess to Germany, the USA, and Britain. For these reasons, the Japanese were eager to get into a fight with the Soviets.