Historically, the origin of Morin Khuur(Horse-head Fiddle) has been defined by Mongols folklore and musicians. Firstly, different legends about the origin of Horse-Head Fiddle, namely, Legend of Cuckoo Namjil”, “Legend of Argasun Khuurch”, “Legend of Jonon Khar” had been popular among the Mongolian people for a long period of time. The main idea of the legends was primarily about the great relationships between humans and horses. 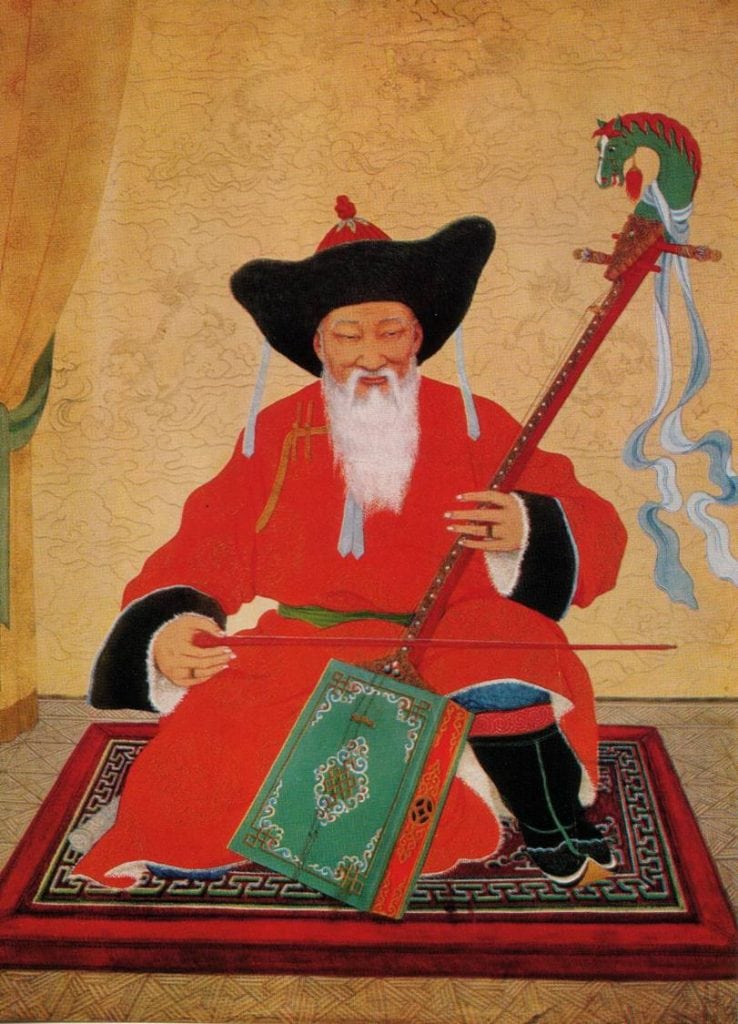 For musicians, Horse-Head Fiddle means big language or ‘ikel’ instruments, which played for telling horse’s tales with a long neck of Khuur and a bucket-shaped feature covered with camel, goat, or sheepskins. This kind of bucket-shaped khuur’s are still used in Western Mongolia. These are different from region to region, they can vary in forms and shapes representing horses, humans, lions, and crocodiles’ heads on the instruments.

The French Scientist M. Each suggested that the origin of Khuur can be dated back to ancient times and linked to the turtle’s footage. However, his arty ideas have not been traced due to a lack of proof.

In conclusion, Khuur and Ikel were existent in ancient Mongolia and different forms of animals and human heads were carved on Khuur. What is more, the Mongolians perceived their horses not only as a means of transport but also as a valuable treasure by carving the horse’s head on their musical instruments.

The Unique Sound of Morin Khuur

Genghis Khan who was a founder of the Mongol Empire ordered to open all ceremonies with Khuur which symbolized the importance of musical instruments in Mongolia. For instance, in the beginning of the state ceremonies, Khuur was played for accompanying the national hymn ‘Ancient Beauty”.

Since XVI century Khuur’s neck was made in the form of a dragon’s head which was related to Manchu Qing’s occupation, as Machu people believed that yellow color denotes the color of the sun and the dragon characterizes a great power as their king who was bright and powerful as the sun. Therefore, Khuur was a musical instrument for Commons as well as for royalty.Khuur plays a significant role in Mongolian music and dance festivals. For example, the Western Mongolian national ‘bielgee’ would be impossible to imagine without Khuur. The main figure who developed and modernized the Khuur music tradition is Mr. G. Jamiyan. He is called ‘Master of Mongolian music’. Jamiyan has not only incorporated the methodology of holding the instrument and fingering the notes on the string but also opened the first Khuur’s professional classes in Mongolia. After 1930, traditional and folklore music was played on Khuur by Mongolian musicians in different parts of the world; in some humid, hot countries it was hard to play any music because of the leather roughness of the instrument, which was shrunk or even stretched. Therefore, the Mongolian Ministry of Culture invited Mr.Denis Yarovoi (the Russian musician) to change the leather of Morin Khuur to a wooden surface, which is currently used as a modern Horsehead fiddle instrument.

It consists of three main parts such as neck, body, and bow, which neck is made in the form of a horse’s head on the top, also it has a tuning peg, body or the box that produce sounds, with two strings, upper and lower bridges a 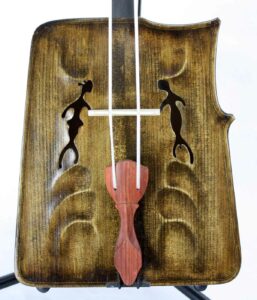 nd bows. Khuur has high and low strings, which `Mongolian people craft during 365 days. The larger of the two strings (the “male” string) has made from a mail tail, while the smaller or lower string has used female tail. Nowadays the strings are made of nylon. Traditionally, the strings were tuned a fifth apart, though in modern music they are more often tuned a fourth apart, usually, The bow is very important thing for Khuur which has been made from willows, birches woods and has two main designs:

The sound from the bow is similar to that of a violin or a cello. The normal weight of the bow should be from 86-95 grams. The string of the Horsehead fiddle is made from horsetail hair coated with cedarwood resin and around 250 pieces of horsetails are used in one instrument. 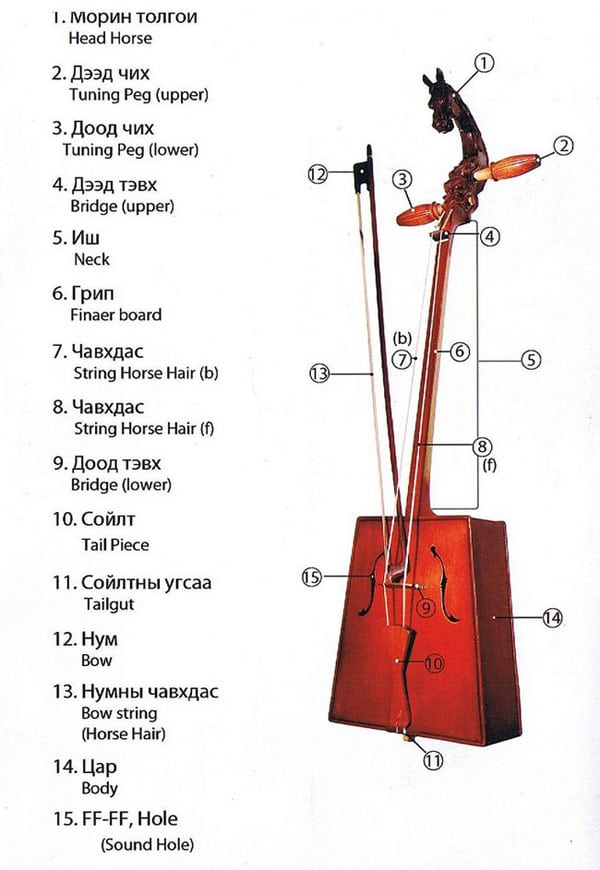 Since the surface of Khuur has been changed from leather to wooden and Mongolian musicians attempt to change the size, currently khuur is having a standard size.

Therefore, the basic sizes of the instrument are as follow :

Tuning pegs: Tuning pegs should be around 15 cm. If in the neck in total 77 cm would be played, the most suitable size would be 44 cm. Horse-Head Fiddle’s surface body: body is trapeze shaped and the upper part is 20 cm, the lower part is 28 cm, height is 32 cm, the distance between back and front size is 10 cm.However, all of them are only general size, which may have some changes because of the musicians’ height and weights.

It is played in a sitting position, which should be taken in distance from the body. Left hands four fingers usually play the instrument. On the tune F / B,♭ the index finger hits on the low (F) string the G, the middle finger hits the G♯, the ring finger hits the A, the little finger the B flat. Identical positions are on the high strings – C, C♯, D, D♯. The little fingertips the B strings under the F string, while all other fingers touch the strings from the top. The position of fingers, their inside movements usually stay far from Khuur’s neck, which gives high pressure to the fingers. For right-hand playing, the technique is the same as the violin instrument.

Modern Khuur is well known musical instrument around the world. Especially, since 1990 the significant developments have been done in Morin Khuur and the most highlighted event related to that is the Mongolian presidential Morin Khuur Ensemble, which was opened in 1992 and played on over 30 countries and consists of 30 professionally trained performers.

The founder of Morin Khuur Ensemble Mr. Batchuluun who has not just played it perfectly, but also trained many professional musicians in Mongolia. From 1992 to 2008 during over 16 years, we can see over 1400 brilliant performances of Mongolian musician who played on both Mongolian and foreign classical music, by showing amazing performances by Horse-head fiddle.  Since that time, they developed it as a musical representation of Mongolian history, values, and cultural heritage. Their main achievements are briefly mentioned below:

The Ensemble regularly performed across Mongolia and toured in many other countries and regions such as Japan, Korea, China, Macao, Turkey, the United States of America, Canada, Italy, the United Kingdom, and Austria.

In 2003, Horse-Head Fiddle was recognized by the Mongolian President as state music, thus Mongolian people should have a Horsehead fiddle in their home and should always try to advertise it.

Morin khuur was inscribed as the best musical instrument onto the United Nations Educational, Scientific and Cultural Organisation (UNESCO) in 2003.

You can buy Modern Handmade Horse-Head fiddle from here.