Mongulai
Mar 24, 2020 History of the Mongols, The Red Army After The White Guards 0 Comment

On June 16, 1921, the Political Bureau of the Bolshevik Party, without much hesitation, approved the “revolutionary onslaught” plan. On June 28, a unit of the Fifty Army, commanded by K.Neiman and G.Chereinisinov, crossed the Mongolian border not far from Kyakhta, where they were joined by Sukhbaatar’s troops. Together they advanced towards Huree, and arrived there on July 5, 1921. Ungern had fled from Huree before the arrival of the Red Army. The Provisional Government headed by Bodoo arrived in Huree and took the reins of power on July 8.

Prayer for the Baron

After fleeing Huree, Baron Ungern’s two cavalry divisions with three thousand men stationed themselves near Hiutnii Am in the central part of Mongolia, while General Rezyuhin’s detachment of 2620 men was located in the Selenge River basin and Colonel Zakhgrand’s 1500 troops were stationed in the region of Lake Hovsgol. The Red Army, which had entered Huree, drove Ungern north to the border of Soviet Russia. The mad Baron, sandwiched sin on both flanks, put up a stiff resistance on both sides of the Soviet-Mongolian border, but was captured and handed over to the Red Amry on august 22, 1921 by the Mongols whom he himself had recruited.

When the Red Army sentry asked who he was, Ungern is reported to have replied in a haughty manner, “I an lieutenant general Baron Ungern von Stenberg, the commander of the Asian Cavalry”. For greater publicity, he was not tried in Irkutsk but in Novonikolaevsk, the official capital of Siberia, and the trial was given wide coverage in the press. He was condemned to death by firing squad. When the news of his death reached Huree, at the initiative of the Bogd, the temples and monasteries held prayer ceremonies on his behalf. 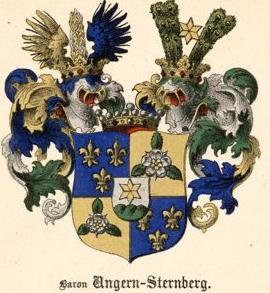 Free From the White Guards

Kazagrand, who was fleeing south with his troops, was shot dead near the Zayan Pandita monastery upon the orders of Ungern, who suspected him of either betrayal or thievery. His detachment was commanded by Sukharev, and some of his men, who had crossed the border, remained alive. Kaigorov, a Kazakh from the Altai, fled to western Mongolia, but on the way, he met with the troops of General Bakich, who was fleeing to Mongolia from Xinjiang. Orenburg’s army was located near Chuguchak in Xinjiang. They had secretly opened their border to the Red army. Having learned of the enormous achievement of Ungern in Mongolia, they fled eastward but encountered the Red Army in Shar Sum. The General surrendered, was placed under arrest and was executed quietly. The troops led by Baikalov and Khasbaatar, who had been dispatched to liberate the western frontier, were besieged for fort-two days by the remnants of the White Units, some fifteen hundred men under Kaigorodov, Kazantsev, and Backij. Among the besieged was one of the future key leaders of Mongolia, Dambdorj. By January 1922 the western part of Mongolia had been totally freed the white Guards.

The danger of confrontation with China is becoming much more serious with every passing day. Go to Beijing immediately and take up the issue of Mongolia in the context of Mongolian autonomy and Chinese sovereignty. make them understand that our objective is to destroy Ungern, who is also their enemy, and give them assurances that we could withdraw immediately after crushing Ungern because we respect the rights of China.

Wire sent from Moscow to Ignatii Yurin, Foreign Minister of the Far Eastern Republic on June 27, 1921.

The Two Policies of the Soviets

When Mongolia became a bastion of Ungern’s anti-communist White Guards, the authorities in Moscow and Verkheudinsk had to take emergency measures. It was perhaps at this time that the Soviets began to conduct two different policies with regard to Mongolia. The Comintern and, in particular, the authorities of the far East Section of the Siberian Bureau did not want to lose Mongolia.

The invasion of Mongolia by Baron Ungern made it possible to export revolution to Mongolia through the party delegates who had arrived in Irkutsk asking for help. The Siberian Comintern authorities were interested in carrying out a Soviet-type revolution in Mongolia by sending the Red Amry to Mongolia in order to drive out the White Guards. They didn’t care whether Outer Mongolia was part of China or not. It was much more important for them to use Mongolia as a revolutionary springboard in order to carry out a global revolution in a huge country such as China.

The issue was being considered more pragmatically, however, in the Soviet Commissariat for Foreign Affairs and other diplomatic circles. They believed that the issue must be resolved in Beijing since Outer Mongolia was a part of China and thought those Mongols who approached them for them fo help in opposing China were too naive. They reckoned that these Mongols could be used only in an emergency situation. This is why they asked permission from the Beijing authorities to send the Red Army into “their” territory to fight Ungern. Between November 10, 1920, and June 15, 1921, the Russian ambassador passed four notes to Bejing congratulating them for sending troops into China to crush the White Guards and to repel Ungern, who had attacked Huree. The ambassador expressed respect for the Chinese suzerainty in Outer Mongolia and explained that the Red Army had been sent to Mongolia to crush Ungern.